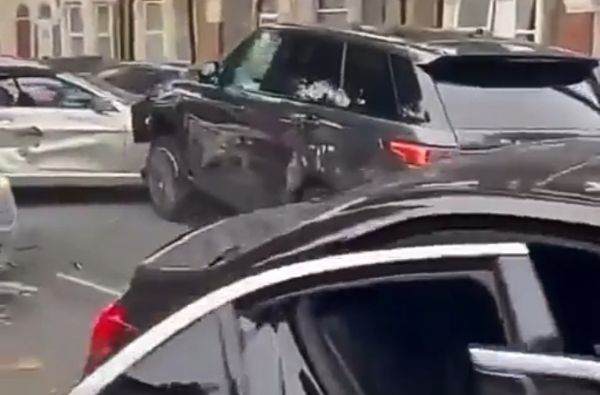 This is the terrifying moment a driver in a stolen Range Rover SUV repeatedly smashes into a BMW during a brazen getaway.

The stolen Range Rover SUV also collided and damaged 12 other vehicles parked at the side of the road in London.

The Range Rover SUV was reported stolen just streets away, just moments before the shocking scenes.

Police said the driver left the stolen Range Rover on the road and got into a another vehicle before police arrived.

Occupants in a BMW 6 Series were lucky to escape uninjured after a driver in a stolen Range Rover repeatedly rammed his SUV into their vehicle during a brazen getaway in a residential London street.

A CCTV footage captured at the scene shows the terrifying moments the stolen Range Rover SUV repeatedly rammed into the BMW, forcing the sedan to spin sideways.

About 12 other cars parked at the side of the road were reportedly damaged during the incident as the SUV keeps reversing into them while the driver was finding a way to clear the BMW from the road.

Finally, the Range Rover forces the 6 Series to the side of the road before speeding off at speed. According to reports, about 13 vehicles – 12 of which were parked at the road side – were totalled during the incident.

Locals, who rushed out onto the street to see what was going on, said the Range Rover SUV was stolen just streets away, moments before the shocking scenes. 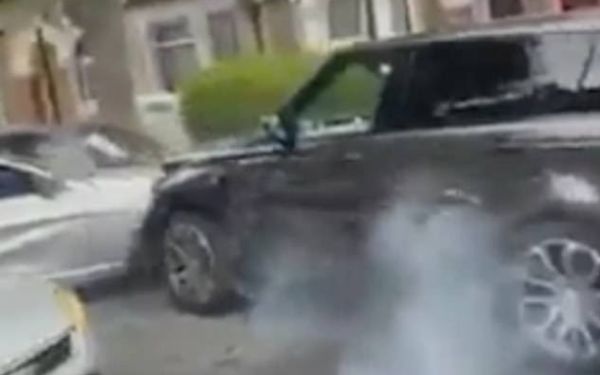 Met Police, who confirmed they are investigating the incident, said that “the driver left the vehicle (the stolen Range Rover) and got into a another vehicle before police arrived”.

“Police were called to Benson Avenue, E6, at 16.46pm on Sunday to reports of a Range Rover car colliding with a number of other parked vehicles.

“A group of at least 10 vehicles were found to be damaged and it was reported that one vehicle, containing a man and two children, had been pushed onto a footpath.”

“BMW had two young kids inside.”

“The Range Rover had been reported stolen from Melford Road, E6, a short time before the collisions.”