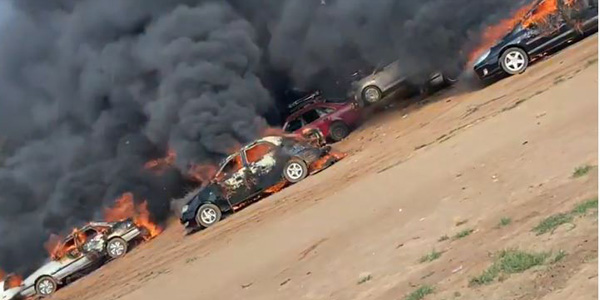 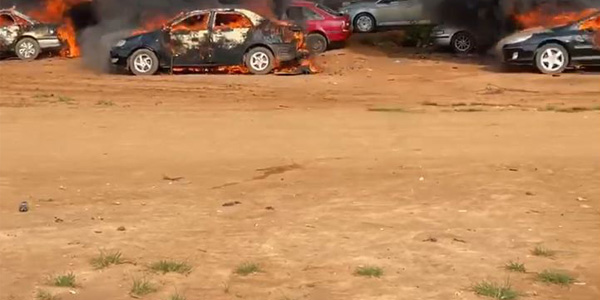 The miscreants are believed to be anti-#EndSARS campaigners. They have on multiple occasions attacked the protesters.

Monday’s attack by the Anti-EndSARS thugs happened simultaneously while the police were also dispersing the protesters.

In a tweet, the Feminist Coalition said the thugs were sent to incite violence to discredit the ongoing protest.

“The cars of peaceful protesters have allegedly been set on fire in Abuja by these thugs that continue to disrupt and incite violence.

“Abuja protesters please head to safety! Your lives matter and should not be dispensable due to political games,” the tweet reads.

Watch the video of the burning cars below.

It was previously reported how armed policemen fired live bullets and teargas to disperse peaceful protesters gathered at AYA Junction in Abuja, injuring many of them in the process.

A female protester holding a Nigerian flag was beaten up by the policemen in an attempt to retrieve it from her.

As at the time of this report, many of the protesters had ran for cover. Anti-EndSARS

Also, soldiers have been deployed to some strategic locations across the city including the Presidential Villa gate.

The incident occurred around 11am.

The hoodlums also vandalised other properties within the police premises.

First responders including firefighters were yet to be seen at the incident venue as of the time of filing this report.

The hoodlums had hijacked the #EndSARS protests ongoing in the country against police brutality. Anti-EndSARS

Some unscrupulous elements also broke into the Benin Prison popularly called White House and freed several inmates in one of the cells.

Also destroyed was the High Court 4 which is beside the prison that was vandalised.

Meanwhile, the Edo State Government has imposed a 24-hour curfew across the state “till further notice.”