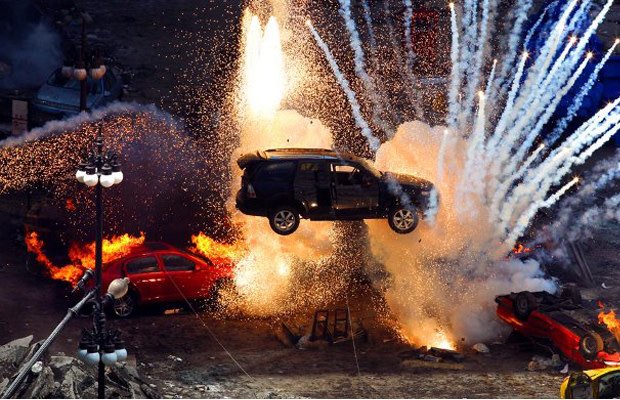 Hollywood  and movies in general has fed us with very many impossible stunts and we have believed that its possible because its “Hollywood” and they must be right.

I am here to debunk some myths and let you know some facts.

Big lie, it doesn’t .If you have ever drifted in a real car or at least in a video game like Blur, you would know that when you drift your speed significantly reduces.

Its very funny that they make us believe that you can abandon a car for ten years, touch two wires together and it just starts easily, without even changing the battery or fueling the car !!. Chances of this happening in real life is almost zero.

If you drive in Lagos nobody needs to tell you that it can’t happen, “ordinary Danfo” impact can make your car useless.You can’t just drive off your car over a considerably high place, land on level ground and keep driving like nothing happened, without a single scratch !. Maybe you can try it with a tank, or a vehicle built for that purpose, definitely not your Toyota Camry. Yes, even the 2020 model 😝, something must happen to it.

While this can be done, its not so easy and effortless as movies try to paint it.You can’t just stick a screw driver in every car and gbam !, it starts.Its not so easy to pull out wires and just join any two to start the engine, its even more difficult in modern cars.

5.Its Easy Riding Outside Cars

Even Danfo conductors don’t stand on top of the buses.You see many movies, especially Fast and Furious, portraying how “easy” it is to jump from one vehicle to another on high speed, land on them and hold on while they speed off.Its not that easy, you would get thrown off ! .

6.All Cars Are Bullet Proof

In movies, when rivals are shooting at each other, you often see them take cover behind their cars that aren’t built to be bullet proof.Except a vehicle is bullet proof, bullets would pass effortlessly through regular cars.If at all you are going to survive hiding behind a regular car, you have a better chance at survival when you stay around the engine area.

Mythbusters extensively tested this, its just does not happen, maybe one in hundred cases, and there has to be a spark, there also has to be a fuel leak.But this rarely happens in real life as often as movies portray it.

8.Shooting At A Car’s Fuel Tank Would Cause An Explosion

Again, Mythbusters also tested this, they fired several rounds at a vehicle’s fuel tank, it had minor fire from the sparks, but there was no explosion.This does not mean an explosion is not possible, but definitely not as instant as movies make it look.

9.Jumping From One Cliff To Another

If the distance is very short and your vehicle is very light, its very possible, and just like in number 3 above, if you eventually get to the other side, you car would be seriously damaged, except its built to withstand such impact.
The most unbelievable movie I saw this was Speed, starring Keanu Reeves and Sandra Bullock, when the bus jumped from one part of the bridge under construction to another part with a large space in between. I would have loved to go into a Physics lecture why its just impossible, considering the fact that its a bus !, with people in it !. It was just too heavy to make that jump and land safely on the other side, gravity and village people are not that friendly 😒.

10.When You Are Hit By A Car You Land Right In Front Of It !

I am saving this for last, because I have personally experienced this, and our darling Nollywood has been lying to you.Except the car is moving very slowly, you can’t get hit by a car and land exactly in front of it, I forgot to add that they even make the actors slide gradually off the bonnet as they fall majestically to the ground, ah !.
I got hit by a Keke(Tricycle) some years back, he was not even on full speed, I was knocked off at least 8-10 feet away from the Keke !!, there was nothing gradual or majestic about it.

What are your thoughts, we would like to hear from you.

Why Steve Jobs Changed His Car Every 6 Months