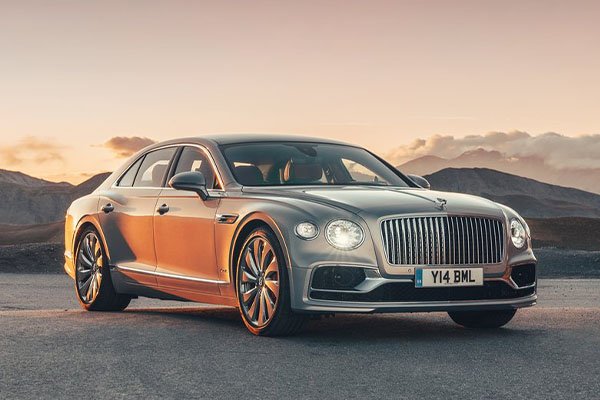 The all-new Bentley Flying Spur is the ultimate luxury Grand Touring sedan. Offering the perfect fusion of performance-orientated agility and exclusive four-door, limousine-style comfort. There’s enough legroom to accommodate the average NBA player, and the extra-pillowed headrests are nothing short of blissful.
The 2020 Bentley Flying Spur shares its platform with a Porsche. And it’s the better car for it. In fact, the 2020 Flying Spur—effortlessly fast, opulently detailed, and brimful of raffish charm—is the best Bentley sedan of the modern era.

It’s clear that the stately Flying Spur has passed its first trial on the trail to deification: It looks like money. This third iteration of the lesser Bentley sedan appears more imposing than earlier versions. Its massive upright grille telegraphs grand English luxury in a way the earlier examples did not. Look at the original Continental Flying Spur from 2005 and marvel at how its little grille looks almost apologetic compared to the lock-jawed arrogance of the new model. The nose now gets that other archaic signifier of old-world class, a gleaming hood ornament.

The elegant, muscular proportions, especially at the rear, are highlighted through the marque’s latest generation cut-crystal effect LED matrix headlamps and new wrap-around rear lamps incorporating ‘B’ motifs. Stylish new 21 and 22-inch wheel designs further enhance the Flying Spur’s personality and prowess. For the first time on a Flying Spur, Bentley fitted the retractable ‘Flying B’ mascot which is displayed on the nose of the new model. Electronically operated, it rises from beneath a beautifully modern Bentley badge.

Related Post: The New Bentley Flying Spur Is A 207-mph Grand Tourer With Retracting And Illuminating Flying B Hood Ornament 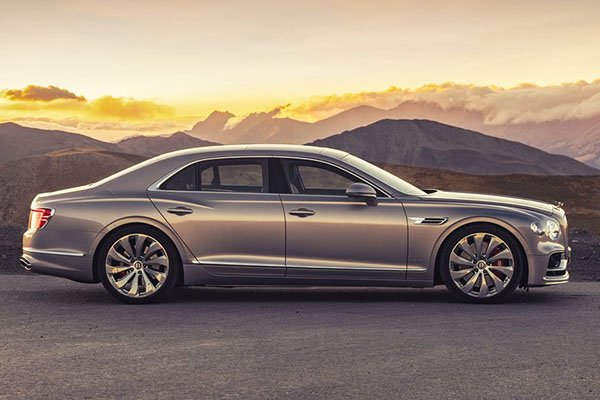 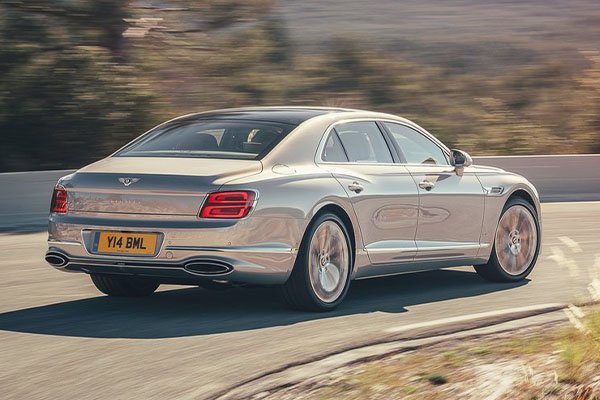 The Flying Spur’s interior has all the warm wood, rich leather, and sparkling chrome you’d expect in a Bentley. The Flying Spur has no fewer than 15 different standard leather colours. These can be mixed and matched via a number of dramatic colour splits, and accented with contrasting stitching. Buyers can choose from eight different veneers, including a new crown cut walnut. The showstoppers are the optional three-dimensional diamond quilting effect—in leather or wood—on the door trims, and an optional etched finish on the centre console made up of 5,331 individual diamond shapes, each different from the other.

Three audio systems are available. The standard system has 10 speakers and 650 watts. Next up is a 1,500-watt, 16-speaker Bang & Olufsen system with illuminated grilles and the one-touch BeoSonic user interface. Top of the range is a monster 2,200-watt Naim for Bentley system. 19 speakers and active bass transducers are built into the front seats. Thunderously vibrant, it’s one of the best automotive audio setups in the business. 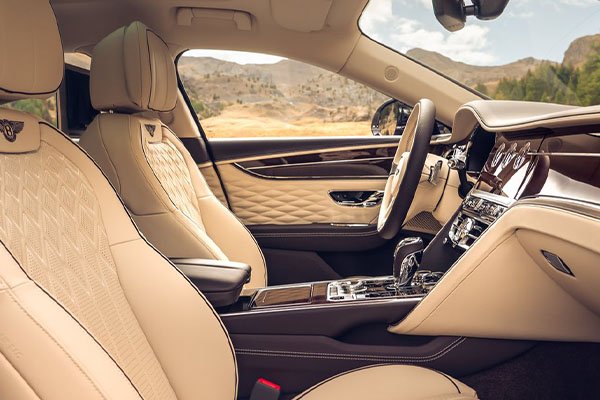 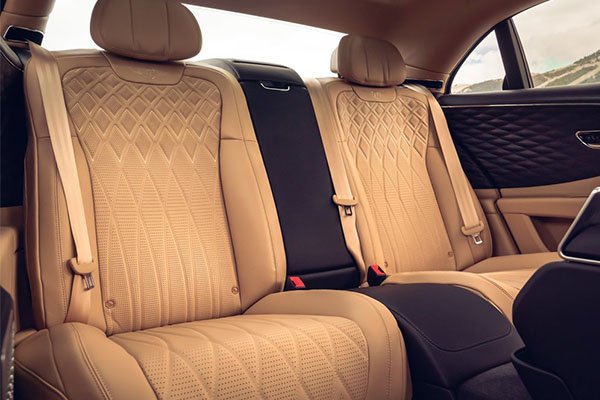 Rear passengers can control a number of functions—including window blinds, rear-seat massage, rear climate control, music, and mood lighting. These are done via a 5.1-inch touchscreen remote that unclips from the rear of the centre console. Detachable tablets behind the front seat headrests also allow them to access the Bentley Multimedia System. The array of apps includes access to the Google Play store. The heated and ventilated rear seats feature 14-way power adjustment and five massage modes. Tall passengers will find the rear seat squab a little short, and that they’re peering out of slit-like windows that are an inevitable by-product of that rakish roofline. 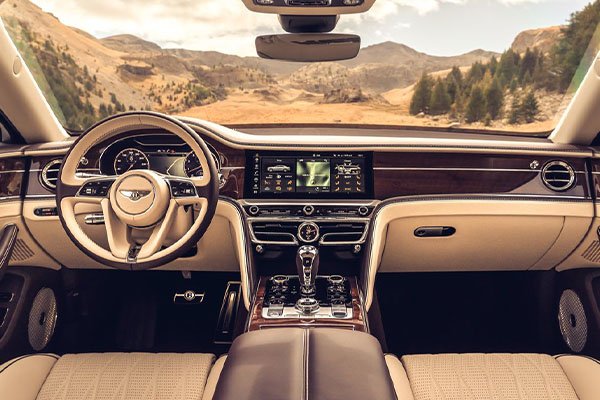 All-wheel drive is standard across the range. It is silky smooth and consistent, which isn’t always the case with dual-clutch units. The 2020 Flying Spur comes in an 8-speed dual-clutch automatic transmission.

Tucked beneath the massive hood is a twin-turbocharged 6.0-litre W12 that produces 626 horsepower and 664 pound-feet of torque. The figures it produces are double-take worthy: The Flying Spur sprints to 60 miles per hour in 3.7 seconds and onward to a top speed of 207 miles per hour (and it can go faster). This is 0.2 seconds quicker to 60 than a Toyota Supra, while its top speed betters that of a and higher top speed than a Lamborghini Huracan Evo.

The car now includes a standard rear-wheel steering system, which turns the rear wheels counter to the front wheels at low speeds, and in the same direction at high speeds to improve agility and stability, respectively. However, there’s an active anti-roll system that relies on a 48-volt electrical system to quickly connect and disconnect the anti-roll bars.  This improves lateral performance and limits body motion without disturbing the sedan’s ride quality. Moreover, the air suspension now boasts air chambers with 60 percent more volume, giving the suspension a much greater ability to switch from cushy to sporty. 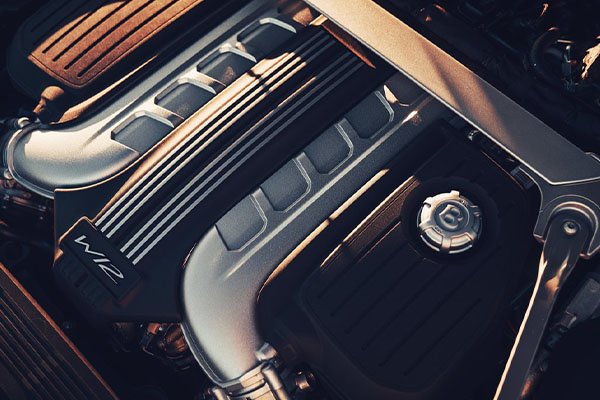 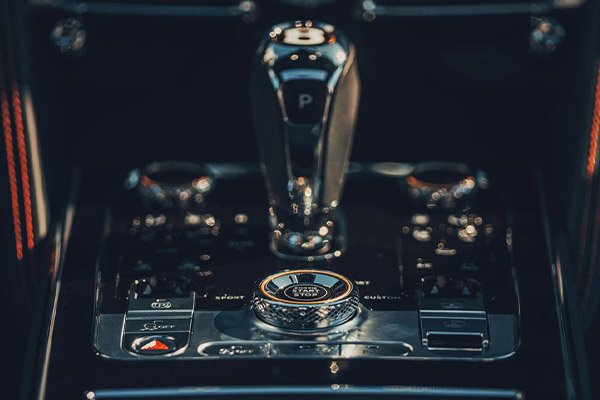