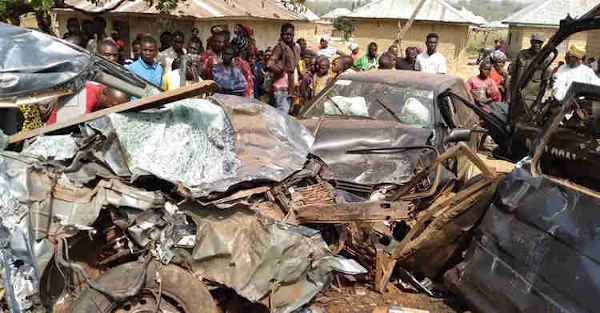 The Federal Road Safety Corps (FRSC) and the Nigerian Police Force have confirmed the death of not less than 28 passengers on Thursday. This was the result of a head-on collision involving two vehicles along Bauchi-Ningi Federal Highway, Bauchi State.

FRSC operatives confirmed that the accident involved two motor vehicles. The vehicles were a Toyota Hummer bus conveying twenty-two passengers and J5 bus conveying four passengers and twenty cows. The 28 people were burnt beyond recognition. They include 4 male adults. The driver of the bus survived.

However, according to the police, 10 cows survived while 10 other cattle were burnt beyond recognition. From the 10 surviving cows, eight were later slaughtered due to their fragile conditions.

Meanwhile, this is coming one week after six persons were killed along Buchi-Jos road. The FRSC Bauchi Sector Commander, AbdulRazak Najume, told newsmen that the accident occurred in the early hours of Thursday. The accident involving two vehicles on a head-on collision.

The FRSC commander said that the victims were immediately evacuated from the scene to Abubakar Tafawa Balewa University Teaching Hospital for treatment. Unluckily, he said on reaching the hospital, twenty-five passengers were confirmed dead.

Also read: MOMTAN 2019: What MOMTAN Planned To Do To Limit Road Accidents

“The accident occurred when the two vehicles were coming towards the opposite direction and on reaching a point along the road. They had a head-on collision, thus, all the 26 passengers from the two vehicles sustained serious burn injuries.

“The victims were immediately evacuated from the scene by security agents with the assistance of good Samaritans to Abubakar Tafawa Balewa University Teaching Hospital for treatment. Unfortunately, on reaching the hospital, twenty-five (25) passengers were confirmed dead by the medical doctor while one (1) survived and is on admission receiving treatment.”

The statement added that the Toyota bus driver slept off. Thus, he lost control and had a head-on collision with the other oncoming vehicle conveying cows. “The accident occurred at Gubi Gari Village, along Bauchi-Kano highway.

“The vehicle took off from Dutsinma in Katsina State and was on its way to Adamawa State when the accident occurred. There were 29 people who were involved in the crash and only one survived. The driver of the Toyota bus was sleeping and he suddenly woke up to see the other oncoming vehicle but he lost control and had a head-on collision with the J5.

“Immediately the crash occurred, the two vehicles caught fire.  Therefore, all of them including the passengers and the cows were all burnt beyond recognition. It was only the driver of the Toyota bus that survived with serious injuries.

“In all, 28 people, 24 in the Toyota bus and four in the J5, were burnt beyond recognition. We could only identify that four of them were males while the sex of the others could not be ascertained.”

Parked Tankers Are Back To Expressways In Lagos (See PHOTOS)