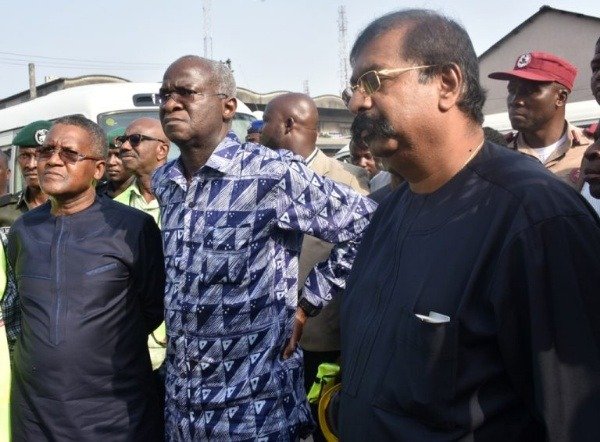 President/Chief Executive Officer of Dangote Group, Aliko Dangote, has revealed that the 35-kilometer Apapa-Oshodi expressway will last for 40years when completed.

He said the bridge currently under construction by Dangote Industries Limited will be one of the best in Africa when completed next year.

Aliko Dangote gave the assurance on Monday when he took the Minister of Works and Housing, Babatunde Fashola, on an inspection tour of the Apapa-Oshodi-Oworonsoki-Ojota highway

According to Dangote, the congestions at the ports as a result of the gridlock has cost the company a fortune. He said the company has lost about ₦25billion in revenue between 2017 and 2019 financial year.

Commenting on the quality of road been constructed, Dangote said the new bridge will revive commerce around the Apapa area.

“This road will actually open up the economy.”

“We expect that by the end of 2020, the entire road network will be finished. You will have a road that will last for 40 years,”

The 35-kilometer long Apapa-Oshodi expressway project began in 2018. It is part of a bargain between the company and FG to enjoy a 10-year tax rebate that accrues to N72.9billion.

Speaking during the inspection, Minister of Works and Housing, Babatunde Fashola, said :

“The Federal Government is dedicated to the speedy completion of the highway to provide a lasting solution to the problems of bad roads and gridlocks.”

“Businesses have started coming back on Liverpool Road because the road closed earlier is now back. You will see more of that.  All of the businesses that are shut on Creek Road will come back. We expect to see property redevelopment and property renewal once the road is completed.”

The Ex-governor of Lagos State further explained that the project will create wealth around the surrounding areas. This is because trucks will be needed to convey different materials to the site of the construction.