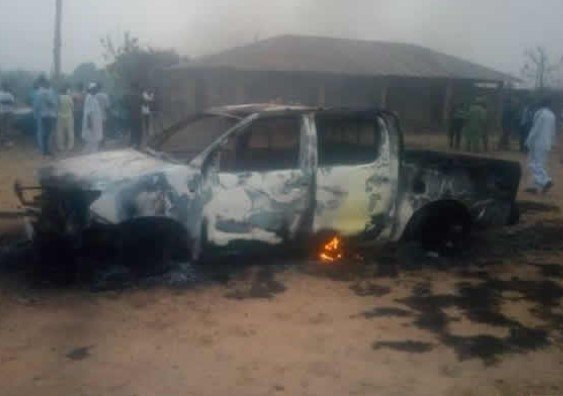 The incident reportedly occurred over the weekend while the deceased were on duty at the checkpoint of the agency’s Ifon Division around Ikaro/Sabo axis in Ose local government area of Ondo State, via the Owo/Benin highway.

Accoerding to a source, the gunmen suspected to be drug dealers were three in number. The gunmen armed with AK 47 rifles came on motorcycles and shot four NDLEA officers and as well set ablaze the agency’s Toyota Hilux.

“The NDLEA officers were five in number at the check point but one of them escaped and their rifles were taken away,” the source said. Same source confirmed that the bodies of the NDLEA officials were found by some farmers in the early hours of the day.

“When their bodies were discovered, their guns were not found with them.

“Our society is no more safe, if armed men are being gunned down like that,” the source lamented.

You may also like:  Customs Officer Shoot Unarmed Man Dead Over Alleged N5000

The NDLEA Commander in the state, Mr Haruna Dagara, who confirmed the incident, said efforts were ongoing to arrest the perpetrators.

“Our men have gone to evacuate the corpses from the scene and other paramilitary agencies are on ground,” he said.

Based on various statistics, among all the states in Nigeria, Ondo State is one of the strongest dealers of drug. They also specialize in the cultivation of Cannabis Sativa, popularly known as “Indian Hemp”.

Related Topics:ndleaofficersondoshot. crime
Up Next