This happened when a container fell off a truck and crushed two young women to death. Both are yet to be identified.

The incident, it was gathered, happened around 10.45 p.m. Emergency responders have recovered the bodies and taken them to a morgue.

The truck was loaded with an empty 40-foot container. It was gathered that it suddenly suffered brake failure and rammed into a stationary truck. It was at that point that the container fell off. However, the driver of the ill-fated truck was rescued by LASEMA personnel, who took the injured man to a hospital. 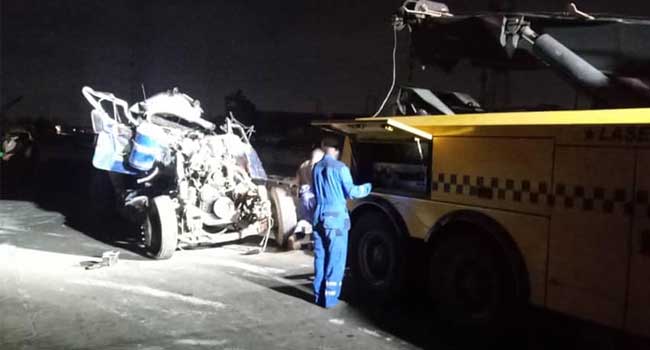 In recent times, cases of containers falling of trucks killing motorists and pedestrians have been on the rise.  This is most frequent along the Oshodi-Apapa stretch.

Two staff members of FAAN where victims earlier in the month.  On July 26, another container fell on a commercial bus, killing two. Both incidents were at Ilasa Bus Stop, a few kilometres from Odo-Olowu Bus Stop, where Friday’s incident occurred.

According to reports, that after numerous incidents of falling containers in Lagos and some parts of the country, the Federal Road Safety Corps had launched Operation Scorpion II to arrest and prosecute drivers of articulated trucks with unlatched containers.

Man Drives To Work In $80,000 Bentley Continental GT To Quit His Job (Photos)