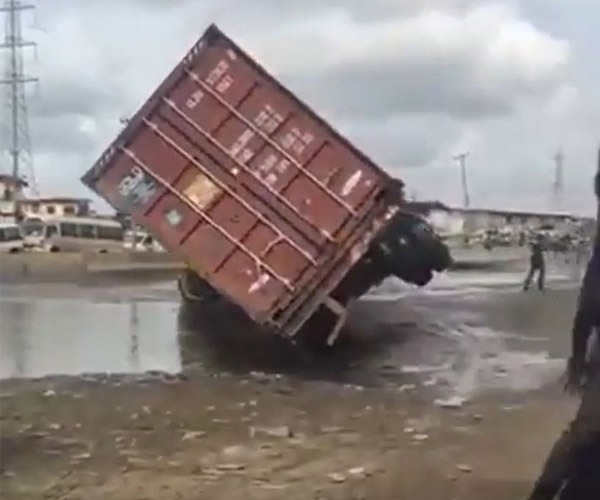 The video below shows the moment a container truck fell down at a bad spot on the road. container-laden Truck falls

This accident was reported to have occurred somewhere at Mile 2 in Lagos State.

It is unconfirmed if the driver or any occupant of the truck sustained injuries from the fall.

It is a centre not only for commerce and the country’s burgeoning high-tech industry. It is also the hub of its creative industries, including music, fashion and the Nollywood film industry.

Lagos was the nation’s capital until government functions shifted to Abuja in 1991. Truck falls

All the structures of modern society appear to have broken. Moving around the city is an act of self-torture.

Millions of less well-off Lagosians, particularly those on the mainland, live in a city at permanent breaking point.

Heavy rains routinely occur outside the normal rainy period, a phenomenon blamed by many on climate change.

Flooding has turned potholed roads to mud and added to the traffic chaos. container-laden Truck falls