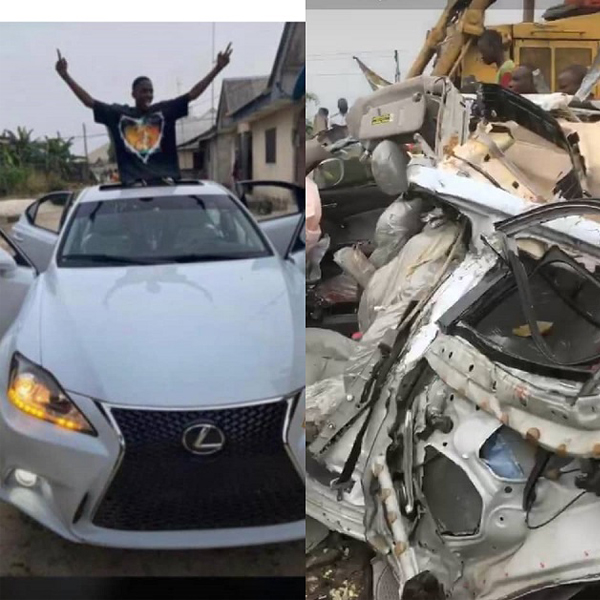 A  celebration over a newly-bought Lexus GX 460 turned sour on Friday night. This happened when six suspected internet fraudsters, otherwise known as Yahoo boys, died after ramming the car into a stationary truck.

The accident occurred along the Agbarho-Ughelli section of the East-West Road near Ekiugbo Junction in Ughelli, North Local Government Area of Delta State.

The  incident occurred 8:00 p.m on Friday and left the car damaged beyond repairs.

The victims were allegedly under the influence of substances. They reportedly died on the spot after their vehicle rammed into the stationary  truck.

The accident which involved a Lexus SUV occurred near Ekiugbo junction along the Agbarho-Ughelli axis of the East-West Road in Ughelli North Local Government Area of the state. Yahoo Boys

The victims reportedly died on the spot after their vehicle rammed into a stationary truck.

They were said to be celebrating one of their friends who had just bought an exotic car shortly after recording a breakthrough in the Yahoo business. Yahoo Boys

“The accident took place near Ekiugbo Junction at about 8pm on Friday. One of them bought a 2021 Lexus GX 460.

“The Lexus arrived Ughelli around 5pm while the accident happened around 8pm.

“They were returning from a joint where they had gone to celebrate the arrival of the vehicle.

“The new vehicle rammed into a pay-loader truck along the expressway. Yahoo Boys

“The six of them died on the spot,” an eye witness said. The source added that the new vehicle was damaged beyond repair.

This was coming barely a week after a similar accident also claimed the lives of two suspected Yahoo Boys near Wetland Hotel in Ughelli.