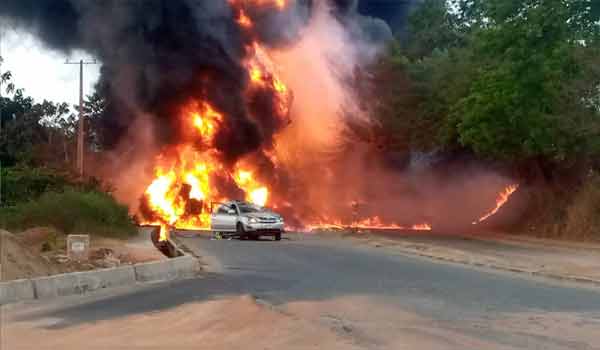 Five persons were, on Wednesday, burnt to death, while two others sustained varying degrees of injury following a petroleum product tanker explosion in the Ajilete area of the Owode-Idiroko Road, Ogun State.

Our correspondent gathered that the accident occurred when the diesel-laden tanker was descending the sloppy road and its tank suddenly detached from the lorry head, fell off and went up in flames.

An eyewitness said the truck was conveying 33,000 litres of diesel when the fatal crash occurred. 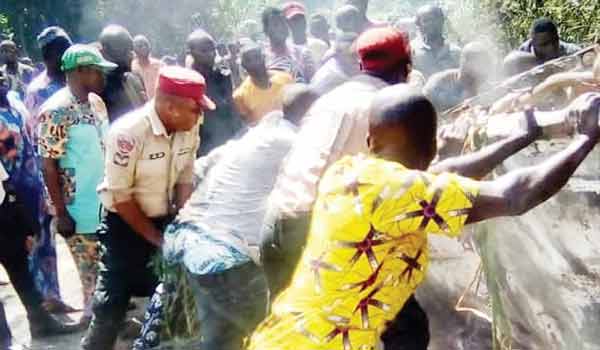 It was learnt that the resulting explosion killed five residents of the area on the spot and left two others injured.

Olaluwoye said contrary to the rumour that seven persons died, only five deaths were recorded.

He explained that the accident occurred around 8.15am, adding that the victims were burnt to death.

He said a bus and a motorcycle were also consumed by the inferno.

The unit commander added that the victims’ corpses had been recovered by their family members.

Olaluwoye said, “No vehicle rammed into the tanker. The tank detached from the lorry head and exploded. The number of persons involved is seven, out of which five died, while two were injured.

“The driver had driven away the head of the truck as of the time we got there. But we have allowed the police to take charge and handle that aspect.”


Related Topics:diesel-tankertanker explosion
Up Next

Someone Paid N11.5B For A Seat For A 10-Mins Space Trip With Billionaire Jeff Bezos