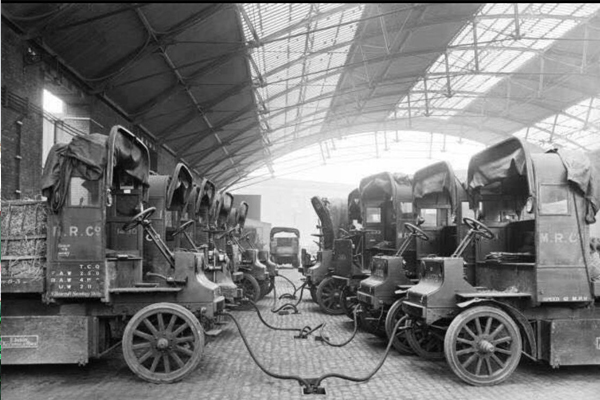 Below is a picture of electric cars being charged in 1907.

Indeed, electric vehicles are not a recent development. The idea of using electricity to power vehicles have been there for a long time.

Electric vehicles first appeared in the mid-19th century. An electric vehicle held the vehicular land speed record until around 1900.

The high cost, low top speed, and short-range of battery electric vehicles, compared to 20th century internal combustion engine vehicles, led to a worldwide decline in their use as private motor vehicles; although electric vehicles have continued to be used in the form of loading and freight equipment and public transport – especially rail vehicles.

At the beginning of the 21st century, interest in electric and other alternative fuel vehicles in private motor vehicles has increased due to growing concern over the problems associated with hydrocarbon-fueled vehicles, including damage to the environment caused by their emissions, and the sustainability of the current hydrocarbon-based transportation infrastructure as well as improvements in electric vehicle technology.

As of August 2020, the fully electric Tesla Model 3 is the world’s all-time best selling plug-in electric passenger car, with around 645,000 units.

Visa Will Be Needed To Kano If Nigeria Breaks, Osinbajo Warns