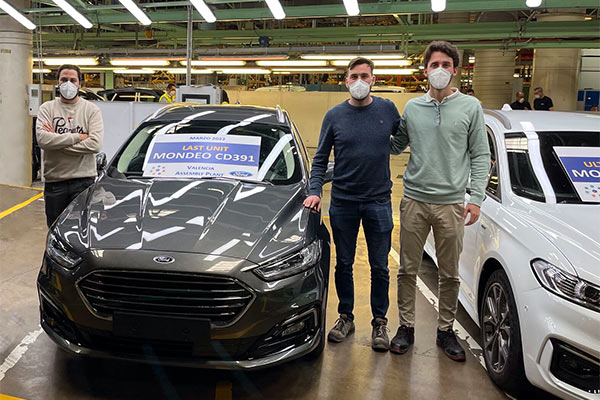 Ford Mondeo production for Europe ends due to declining sales and a growing trend towards crossover SUVs.

The final Ford Mondeo for Europe rolled off the assembly line at the factory in Valencia on April 4th 2022.

The writing had been on the wall since March 2021 when Ford announced plans to end production of the Mondeo. The last nail in the midsize car’s coffin was put into place on April 4 when the final car rolled off the assembly line at the factory in Valencia.

A product engineer took to LinkedIn to share an image of the midsize car’s swan song, a gray wagon with a banner indicating it’s the last of the breed.

That “CD391” represents the model’s codename, which was shared with the defunct Fusion as Ford developed the car as its first truly global model. It’s North American counterpart bid adieu to the car world nearly two years ago, but even though both cars are dead, the model has spawned a new generation in China.

Indeed, the Mondeo Mk5 was unveiled at the beginning of the year in the world’s most populous country where it will be produced. Since its premiere, the Blue Oval has confirmed there are no plans to sell the revamped model elsewhere.

The same thing can be said about the similarly styled Evos, a wagonized SUV we wouldn’t mind seeing outside of China. Prototypes have been caught testing in various parts around the world, so maybe Ford is up to something.

As for the Mondeo, it’s dead in Europe because people generally prefer something else. Ford didn’t specifically mention SUVs, only saying the model is now gone due to “changing customer preference.”

A company spokesperson contacted by Autocar went on to say the Dearborn marque is “evolving our passenger vehicle range in Europe to meet changing customer needs as we move to an all-electric future.”

To some extent, the Mondeo is a victim of the SUV craze. For the same reason, the Opel Insignia will reportedly switch from the traditional sedan and wagon formula to a high-riding offering. Citroën has already gone down this road with the peculiar C5 X while Volkswagen has ended production of the Passat Sedan.

Nissan Kills Datsun Brand For Good, To Focus On Electrification