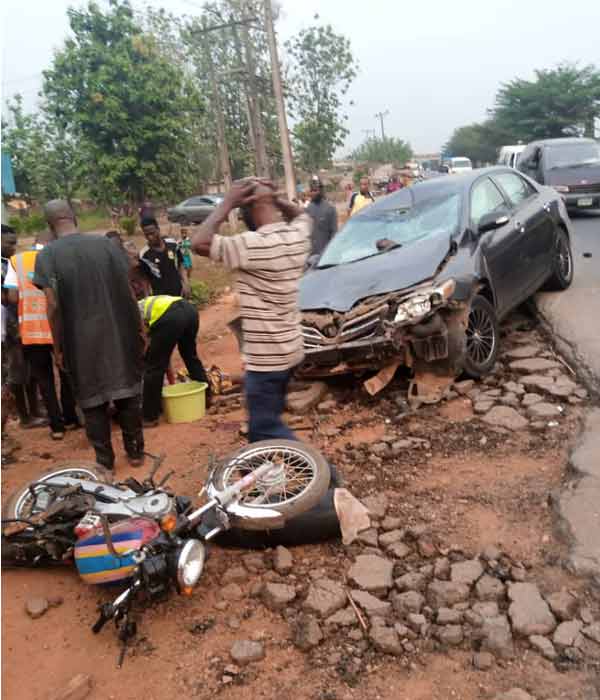 Eight commuters lost their lives in auto crashes in Bauchi and Osun states on Saturday and Sunday, while 12 others suffered varying degrees of injury.

Two persons died in an accident that occurred in Omo Ijesha, along the Ilesha/Akure Expressway Osun State, on Sunday.

The crash involved three vehicles, including a Toyota Hiace bus. Two other passengers were injured.

The accident was suspected to have been caused by wrongful overtaking by one of the vehicles, leading to a head-on collision with the other vehicles.

When contacted, the Public Relations Officer, Osun Command of the Federal Road Safety Corps, Agnes Ogungbemi, said 16 persons were in the affected vehicles.

She said the probable cause of the crash was wrongful overtaking, adding that the corpses of the deceased had been deposited in the morgue of the Wesley Guild Hospital, Ilesha, while the injured were being treated at the same hospital.

“The accident occurred in the afternoon. Two persons died, while two others were injured. The probable cause of the crash was wrongful overtaking. The road has been cleared,” Ogungbemi added.

Similarly, six persons were killed in multiple crashes that occurred around 4.05pm on Saturday involving a vehicle belonging to the Zamfara State Government and two others.

Ten other persons were said to have sustained varying degrees of injury in the crash.

The crash occurred at Gumero village, about 15 kilometres to Kafin Madaki on the Bauchi-Kano Expressway in the Ganjuwa Local Government Area of Bauchi State.

He said the crash involved a white Toyota Hiace bus belonging to the Zamfara State Ministry of Justice, Gusau, and two private vehicles, a saloon car and a Peugeot 406 with number plate KNT 503 JF.

Abdullahi said the fatal crash was caused by wrongful overtaking.

He stated, “After we got a call, our men from the Ningi station office immediately responded and within 10 minutes got to the scene for rescue operation.

“We evacuated the 16 persons involved in the crash to hospital. They comprised five male adults, seven female adults, three male children and one female child.

“The victims were taken to the Kafin Madaki and Ningi General Hospitals for treatment. It was at the hospital that six persons were pronounced dead by a medical doctor.

“Those who lost their lives were four male adults, one female adult and one male child.