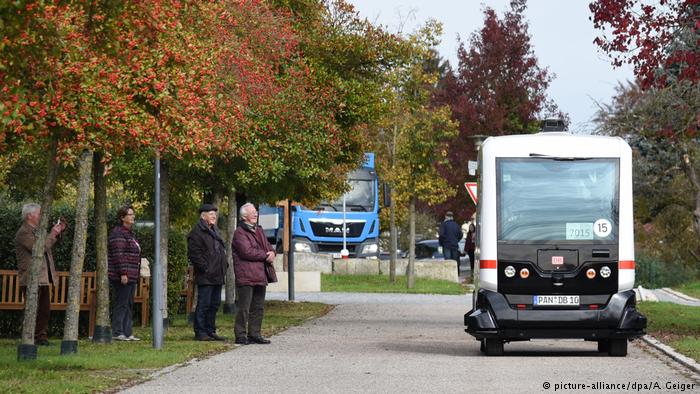 Germany’s first self-driving public bus has made its maiden journey on the roads of a rural town in Bavaria, taking locals from the train station to the town centre.

German transport company Deutsche Bahn trialled the self-driving vehicle on Wednesday 25/10/2017 , delivering townspeople on a 700-metre route between the train station, the town centre, and the Birnbacher baths.

Designed by French startup company EasyMile, the electric vehicle,called EasyTen autonomously navigated its way through the municipality of Bad Birnbach by way of sensors, lasers and GPS systems which can detect obstacles and activate brakes.

The vehicle moves along a pre-programmed route with its speed initially limited to 15 kilometers (9.3 miles) per hour on a road with a 30 kph speed limit. Also, the bus is not yet capable of avoiding obstacles on its own. In case of an emergency, such as a car wrongly parked on the route, a human can take control of the bus by using a joystick.

Deutsche Bahn aims to develop the autonomous minibus further in the future, where it will act like a private car service to pick up passengers upon request from their home through an app.  It could also collect other travellers en route who also require the service.

While EasyTen is the first vehicle of its kind to hit the roads in Germany, the rail company plans to release more similar buses from 2018 in several German towns and cities, such as Hamburg.

300,000 Toyota Sienna Minivans Recalled As They May Roll-Away Unexpectedly