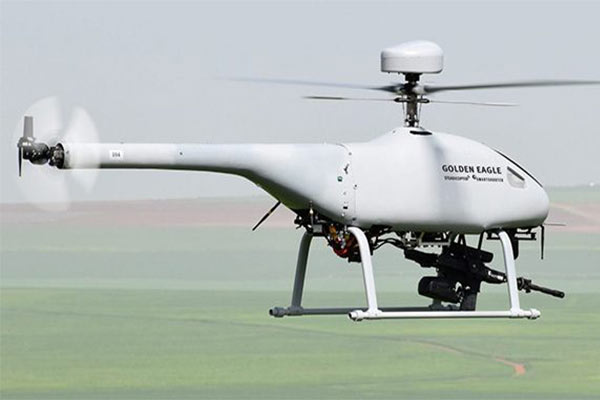 The multicopter can take off and land on a small area, can carry a payload of up to 5 kg and stay in the air for up to four hours.

The Israeli companies Steadicopter and Smart Shooter have announced in a press release that they intend to present an armed and unmanned Golden Eagle multi-copter this week, BulgarianMilitary.com has learned, citing Soldat & Technik.

The presentation will take place as part of ISDEF 2022, a trade fair for defense, which takes place in Tel Aviv from March 21 to 23. The basis for the Golden Eagle is the Black Eagle 50E drone from Steadicopter and the SMASH Dragon System developed by Smart Shooter.

Founded in 2005 and based in Migdal HaEmek in northern Israel, Steadicopter contributes to a powerful and proven carrier platform with the Black Eagle 50E UAV.

The multicopter can take off and land on a small area, can carry a payload of up to 5 kg with a maximum takeoff weight of 35 kg according to the manufacturer, and stay in the air for up to four hours.

A cruising speed of about 80 km / h and a top speed of about 125 km / h gives the system the necessary mobility. The digital data connection allows the flow of various information, such as real-time video broadcasts and other sensory information used by the drone to the user.

The integration of the Smart Shooter SMASH Dragon System turns the Black Eagle 50E into an armed multicopter drone with a stabilized weapon system for various calibers.

Introduced at the beginning of the year, the SMASH Dragon is based on the proven SMASH fire control system, which with the help of highly developed image processing and ballistic computer, thus also without emissions, designs the aiming point of the shooter with a very high probability in the display. optics and also controls the release of the shot.

According to the manufacturer, the compact and light weapon system can be integrated into a large number of unmanned aerial vehicles.

According to Smart Shooter, the weapon system is also effectively stabilized to ensure high accuracy even during dynamic flight maneuvers. In addition, the conversion kit must be suitable for accommodating a variety of weapons up to 40 mm caliber.

In a joint statement, representatives of the two companies stressed the great importance of unmanned and [partially] autonomous systems combined with highly developed artificial intelligence for the challenges of the battlefield of the future.

The ever-increasing importance of UAVs in areas of global conflict suggests that the demand for integrated and armed systems such as the Golden Eagle will also grow rapidly.