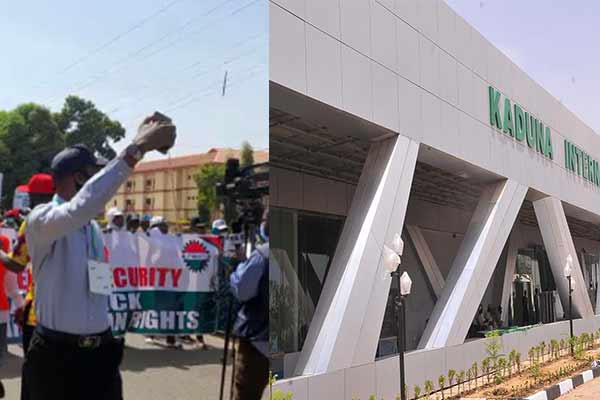 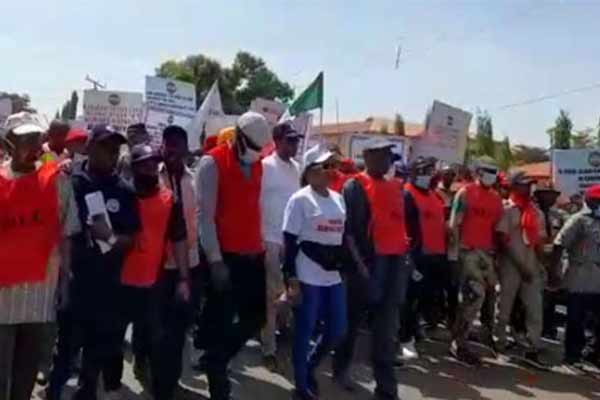 Monday morning was greeted by a massive protest as Members of the Nigeria Labour Congress (NLC) gathered in Kaduna to express their grievances.

This is asolidarity move against the recent disengagement of over seven thousand civil servants at the state and local governments by the state government.

As part of the move, aviation workers have shut down operations of Kaduna International Airport (KIA) effective Sunday midnight.

The workers, under the aegis of the National Union of Air Transport Employees (NUATE), Association of Nigeria Aviation Professionals (ANAP), and National Association of Aircraft Pilots and Engineers (NAAPE), said the airport would remain shut for the period of the warning strike.

National NLC Chairman, Ayuba Wabba, during the protest, said due process was not observed in the recent disengagement of the workers from the Local Government Service, State Universal Basic Education Board (SUBEB), and Primary Health Care Agency.

He said further that all the unions including Student Unions and pensioners are part of the protest as they are all directly affected by the disengagement of workers.

“All those that are here today are those that are directly affected. The students are here. The children of those workers that have been thrown out of their job and were not been paid, they are here with us.

“The pensioners that were not being paid are here with us. They claim that local government employees were consulted. The Local Government Employees are here today, they have issued a statement to say that statement was false.

“All leadership of public sector unions are here.

“It is only Kaduna State of all the 36 states of the Federation that threw workers out of their jobs without,” the NLC Chairman said.

Meanwhile, earlier on Sunday,long queues surfaces at petrol stations in various parts of Kaduna State, especially in the metropolis and other surrounding towns.

Motorists besieged filling stations in what can be described as panic buying of fuel ahead of the planned industrial action by the NLC and its affiliate unions in the state.