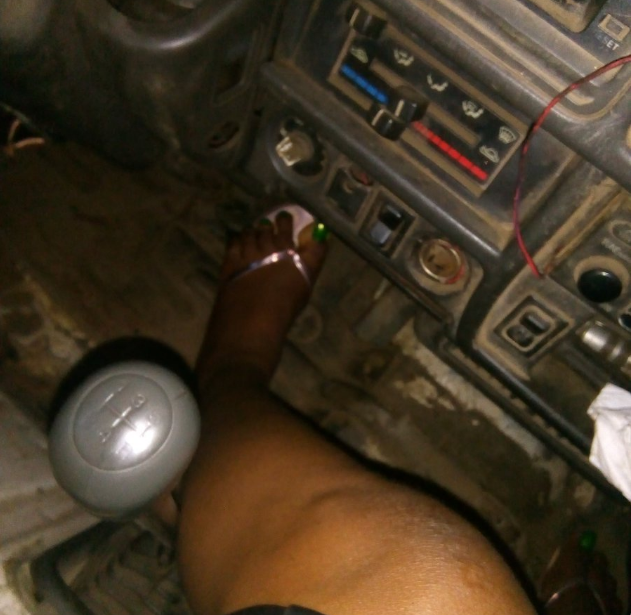 A lady on Twitter with the handle @chiefladyhur narrated here ordeal with a taxi driver in Lagos. She told a story of how the taxi driver made her depress the brake of the taxi from the passenger seat so he can step out and fight.

The taxi driver actually bashed the Toyota Camry in front of him but still went on to fight.

The lady’s narration was mostly in Yoruba language. If you don’t understand the language, we are here for you. We will give you the English interpretation after her story.

Im tired of lagos. Driver scratched one toyota Camry badly and still challenged the man. Next thing driver said sisi mi Jo ba mi teh brake ki yi.. Maa no man yi pa.. He got down. For a moment I discovered so many lives are in my hands. Dear Lord.

Then faced the man wo aiye e maa baje leeni😭

Everyone were actually scared tho.

The woman at my back was just shouting oluwa o..

What if soldier ant bin bite me?

The Camry guy beat my driver tho..

He even forgot to pick his native cap..

The woman that was at my back said

Which Of These 6 Things Is The Scariest When Driving?

English Interpretation of her story;

Okay y’all this was what happened in English.

This lady boarded a cab; the cab then hit a Toyota Camry badly and still challenged the owner.

Next thing the driver said was “my lady please help me press the brake”, saying he was going to beat the owner of the camry; then he got down .

For a moment she discovered so many lives were in her hand . The driver was throwing blows and shouting at the lady that she shouldn’t remove her leg from the brake. Then he continued with the owner of the Camry telling him that his life would be destroyed today.

Everyone was scared. The woman at the lady’s back was shouting God’s name, asking herself who asked her to enter this cab.The lady’s phone then rang, the woman panicking shouted please don’t pick up the call.

The lady started thinking what if Soldier ant should bite her. At last, the Camry guy beat up the cab man so bad He forgot to pick his native cap.

The woman at the lady’s back that was panicking then said referring to the cab man, that with all the energy he has infused in himself, he only has mouth to brag, and since they’ve beaten him now, he’s body is now calm.