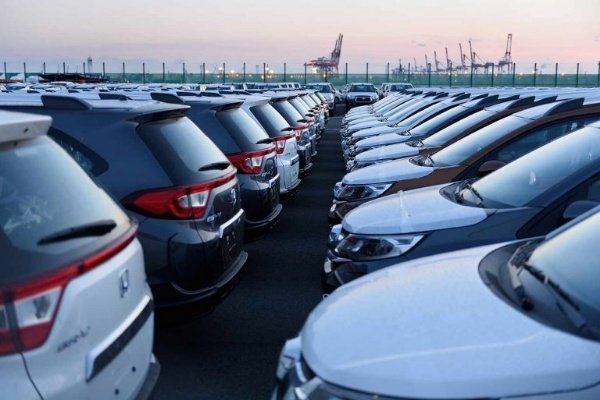 Car dealers in Lagos, on Monday, stormed the Lagos State House of Assembly to protest the continued sealing of their marts by the Customs.

Car dealers in Lagos, under the aegis of Automobile Dealers’ Friends Association (ADFA), stormed the Lagos State House of Assembly on Monday to protest the continued sealing of their marts by the Nigeria Customs Service (NCS).

The protesters were carrying placards with inscriptions such as “Enough is Enough, Release our Shops”; “Customs, we are legitimate businessmen and women”; “We are not smugglers”; “EFCC, Investigate the Customs”; among others.

“Since the 30th day of September, 2019 when our business premises were arbitrarily sealed up, we have been unable to transact any business.

Recall that the Nigeria Customs Service on September 29th 2019 sealed the marts of several car dealers in Lagos. The NCS said the dealers should reconcile their papers by paying the required duty on vehicles in their marts.

A day after the closure, some of dealers visited the Nigeria Customs Service, Federal Operations Unit, Zone ‘A’ with documents of their vehicles to prove they were not not smuggled into the country.

The protesters wants President Muhammadu Buhari, Governor Babajide Sanwo-Olu and the Speaker of the House, Mudashir Obasa to compel customs to open their premises.

Two lawmakers – Hon. Bisi Yusuf (Alimisho 1) and Hon. Ganiu Okanlawon (Kosofe 1) received the petition on behalf of the speaker. They promised to investigate and address the concerns of the car dealers.

Last month, a group of automobile dealers in Lagos sued the Customs for N10 billion because of the unlawful sealing.

The auto dealers, who dismissed reports of division among them, staged a protest in Lagos against NCS’s alleged illegal act.

Related Topics:ADFAAutomobile-Dealers-Friends-AssociationcustomsLagos-Car-DealersNCSNigeria Customs Service
Up Next