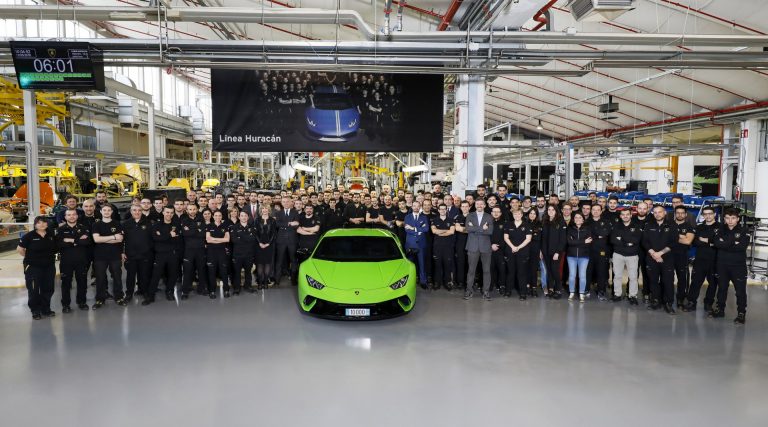 The 10,000th Lamborghini Huracán has rolled off the assembly line in Italy,marking a production milestone for the V10 model of Lamborghini. The celebratory model is an LP 640-4 Performante sporting the same Verde Mantis Green colour as the #11 Huracan GT3 that won its class at the 2018 Daytona 24 hours race.

It’s taken around four years to reach the figure, during which time the Huracan range has swelled to six cars,from the coupe and Spyder in rear and 4 wheel drive forms, and the hardcore Performante, now available with both hard and soft tops.

The Huracan is central to a record year of sales for Lamborghini. In 2017, it delivered 3,815 cars, of which 70 per cent were Huracans, the rest Aventadors.

The Huracán will remain in production for several more years but details are already starting to emerge about its successor. The successor which is due in 2022 will come with an hybrid assistance. V10 engine has become part of the Lamborghini’s DNA and will continue to be found in the next-generation model. Rear- and all-wheel-drive models will be offered.

The Huracan also features powerfully in motorsport, with the Huracan Super Trofeo as leader in Lamborghini’s four single-make series, and the Huracan GT3 competing in championships around the world.

Related Topics:10000huracanLamborghinLP 640-4 Performante
Up Next

5 Vehicle Parts That Are Easily Damaged By Potholes