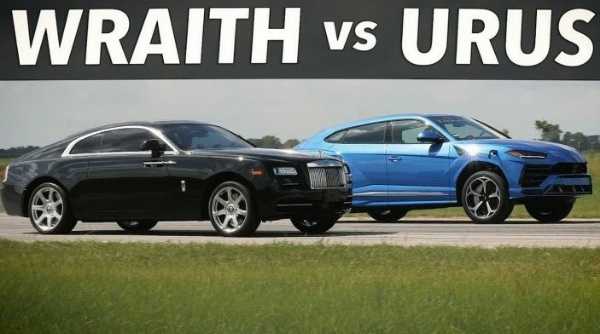 Which is quicker in a drag race between Hennessey Performance-tuned Lamborghini Urus SUV and a stock Rolls-Royce Wraith ?

Is it the Lamborghini Urus SUV that combines luxury and performance or the fastest and most powerful Rolls-Royce ever, the Wraith ?

Drag-race aside, which of these luxury vehicles would you rather have?

The Texas-based company also works on luxury cars such as Rolls-Royces, Lamborghinis, Bentleys and as well as muscle cars like Dodge Charger and Challenger.

Its latest creation is a modified Italian superSUV which it called the Hennessey HPE750 Lamborghini Urus.

To test its latest build before customer delivery, the Hennessey pitted the modified HPE750 Lamborghini Urus against a stock Rolls-Royce Wraith at its Pennzoil Proving Grounds.

The Wraith is a 2-door luxury Grand Tourer that is based on the Rolls-Royce Ghost sedan. The hardtop coupe is the fastest and most powerful Rolls-Royce in the market.

The tuned 4.0-liter twin turbo V8 engine in this particular SUV produces 750 horsepower (from the base 641hp) and 850Nm of torque.

The footage taken from the side-by-side drag race experiment shows that Rolls-Royce’s fastest model has a faster reaction time than the Urus.

Despite its late response, the Raging Bull, which has a clear advantage on paper, dusted the Rolls in the 1/4-mile lap.

Drag-race Aside, Which Of These Luxury Vehicles Would You Rather Have?