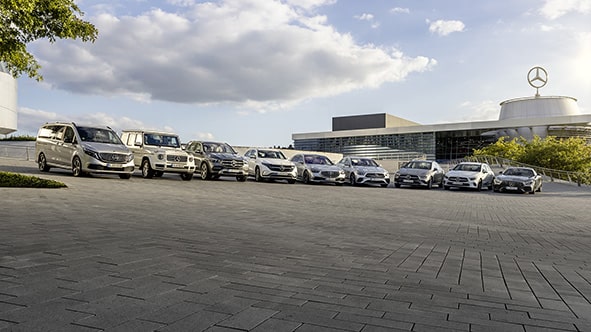 • In the first nine months of the year, Mercedes-Benz Cars & Vans sold 1,792,744 cars and commercial vans worldwide.
• Due to the positive development of customer demand in many markets, global passenger car sales of Mercedes-Benz from July to September increased by 3.9% compared with the prior-year quarter.
• Britta Seeger: “Demand from our customers in the third quarter was significantly higher than we had assumed in March and April in view of the challenges posed by the pandemic. However, the third quarter also shows how regionally diverse the situation still is in the markets and for our dealerships.”
• Mercedes-Benz Vans delivered 95,933 vans for commercial use from July to September (+11.2%).
The recovery of worldwide retail passenger car sales by Mercedes-Benz continued in the third quarter despite ongoing challenging conditions.
Global sales of 613,770 passenger cars in the period of July to September were higher than in the prior-year quarter for the first time this year (+3.9%) due to the positive development in China and rising customer demand in many other markets.
The attractive model portfolio and numerous measures taken by dealerships to respond best possible to customer inquiries and interest even during the COVID-19 pandemic provided additional sales support in the third quarter. In order to meet the high level of customer demand at short notice, dealerships’ inventories were reduced worldwide. 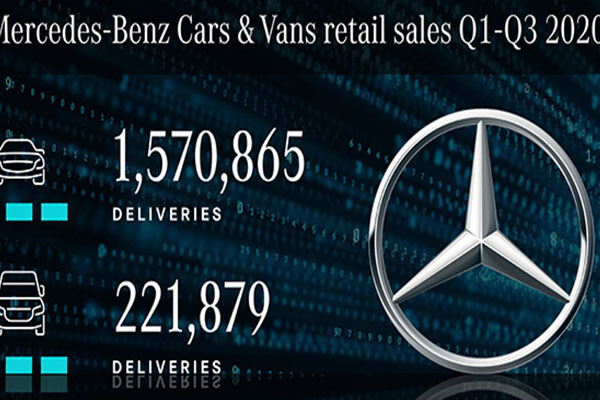 China continued to be the main driver of Mercedes-Benz passenger car sales as the market continued its rapid recovery in the third quarter (+23.4%). In Germany, the domestic market of Mercedes-Benz, sales in the past three months were higher than in the prior-year quarter for the first time this year (+4.0%).

“Demand from our customers in the third quarter was significantly higher than we had assumed in March and April in view of the challenges posed by the pandemic. We are pleased with customers’ positive response to our models and the increasing demand in many markets. However, the third quarter also shows how regionally diverse the situation still is in the markets and for our dealerships. We will therefore monitor developments very closely in the fourth quarter, but the current level of demand is encouraging”, said Britta Seeger, Member of the Boards of Management of Daimler AG and Mercedes-Benz AG responsible for Marketing and Sales. “Rising orders received in particular for plug-in hybrids with the three-pointed star are a great customer feedback on our growing portfolio. From July to September, we had the first quarter so far with more than 10,000 xEVs delivered monthly by Mercedes-Benz Cars. The high demand for the electrified models has been sustained, especially in Europe.”

Mercedes-Benz sold 1,548,859 premium and luxury vehicles worldwide in the first three quarters of the year, thus continuing its upward sales trend (-10.2%). At the smart brand, global unit sales were still below the previous year’s level due to the changeover to purely battery-electric drive; a total of 22,006 two- and four-door urban microcars were handed over to customers in the first nine months of the year (-74.9%).

“Despite the ongoing challenging external conditions in the third quarter, we were able to increase the unit sales of our vans worldwide by eight percent. This growth is largely based on the success of our commercial vans, with which we achieved our best-ever third quarter worldwide,” stated Marcus Breitschwerdt, Head of Mercedes-Benz Vans.

“With the eVito, the eSprinter, and the EQV [combined power consumption: 26.4-26.3 kWh/100 km; combined CO2emissions: 0 g/km]* multipurpose vehicle, we already have three battery-powered vans in our portfolio that are receiving a very positive response. In the past three months, we delivered almost 800 all-electric vans from

Mercedes-Benz to customers and received further major orders for more than 2,000 of our e-vehicles. We are convinced that our products will play a significant role in shaping the next stage of transportation and in making it more sustainable in the long term.”

In the Europe region, Mercedes-Benz delivered 547,578 passenger cars in the period of January to September (-20.9%), while unit sales in the third quarter were almost on the prior-year level due to rising demand in many European markets (-0.4%).

In Germany, Mercedes-Benz increased its sales to 84,676 units in the third quarter, the first quarter of this year in which sales were higher than in the prior-year period (+4.0%). In the Asia-Pacific region, Mercedes-Benz delivered 746,603 premium and luxury vehicles from January to September (+2.1%).

Mercedes-Benz passenger car sales in China were also higher than in the first nine months of last year (+8.3%). And with sales of 223,631 units in the third quarter, China also exceeded last year’s third-quarter record (+23.4%). Sales to end-customers in the North America region in the first nine months of the year totalled 228,397 units (-13.9%). In that region’s core market, the United States, Mercedes-Benz delivered a total of 69,631 premium and luxury vehicles from July to September (-9.4%).

SUV Runs Into #ENDSARS Protesters , Kills 2, Injured Many In Lagos