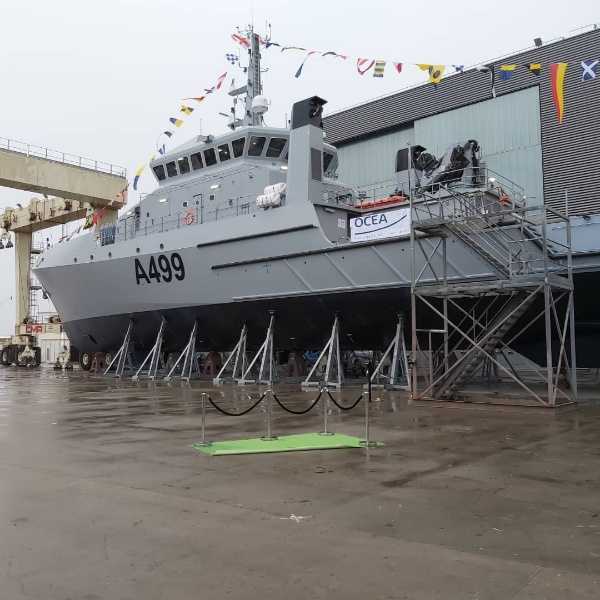 When the new hydrographic survey vessel joins the Nigerian Navy fleet in 2021, it will enhance safety in Nigerian water.

History was made today in Les Sables d’Olonne, France, with the launch of the first ever purpose built hydrographic survey vessel by the Nigerian Navy.

When the new survey vessel joins the Nigerian Navy fleet in 2021, it will enhance maritime safety in the Nigerian water and the Gulf of Guinea.

Speaking at the ceremony held at the OCEA Shipyard, France, Chief of the Naval Staff; CNS Vice Admiral Ibok-Ete Ibas; said the new vessel was conceived as a replacement for the NNS LANA, which was decommissioned ten years ago.

Ibok-Ete Ibas, represented by Rear Admiral Abraham Adaji, described the occasion as one which marked a giant stride in the efforts towards actualizing the dreams of not only restoring but enhancing Nigerian Navy’s survey capability.

CNS Ibok-Ete Ibas hinted that surveying and charting played a crucial role in ensuring safe navigation as well as delivery of maritime security.

He also revealed that the new vessel would not only enhance safety of Nigeria’s maritime environment but would also serve as a critical component of deployment of naval power for enhanced maritime security in the Gulf of Guinea.

He added that the vessel would also “play a critical role in protection of maritime resources and preservation of law and order at sea; thereby contributing significantly to the promotion of global maritime commerce”.

Iju Gas Explosion: See Affected Vehicles At The Scene Of The Incidence (PHOTOS)