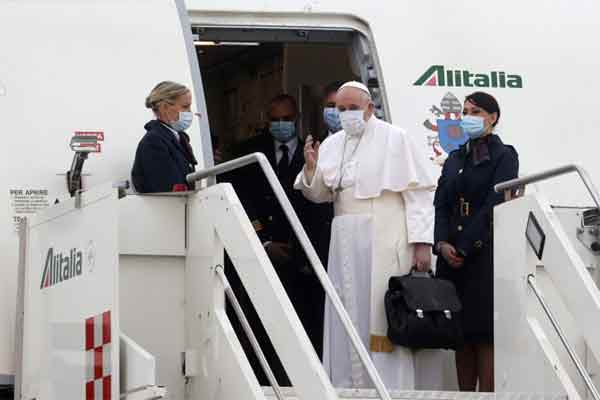 The first papal flight was in 1964. This was when Pope Paul VI traveled to Israel.

At the time, a pope leaving the Vatican, much less taking a then still rare jet, was huge news. Indeed, his flight aboard an Alitalia DC-8 to the Holy Land and back definitely made big headlines worldwide.

Since then, the leaders of the Catholic Church have begun traveling far and wide. The most travelled Pope was John Paul II. In 27 years as pope, he visited 129 countries and flew 725,000 miles.

How does the Pope fly?

When the spiritual leaders of 1.3billion people all over the world fly, they travel as befits a head of state, which they are. And so does Pope Francis.

Unlike other governments that own aircraft  that shuttle them around, the Vatican or the Pope does not own a private jet.

Instead, the Vatican chooses a private jet charter. They typically hire an Airbus from Italian airline, Alitalia.

Since Pope Paul VI, Italian flag carrier Alitalia has been tasked with ferrying the pope on his missions out of Rome.

When flying longer distances, Alitalia assigns its widebody jets to the Papal mission, either the A330-200 or the 777.

The Airbus A330 is a twin-aisle wide body plane. It is considered one of the most reliable aircraft in the sky. The cabin is quite large, with the capacity to carry 247 passengers.

Unlike many planes in a presidential fleet, the Airbus A330-200 is not equipped with an office, conference room or private bedroom.

Instead, the “Raffello Sanzio” is the same Alitalia used for commercial flights, with 20 business class seats and 263 in coach.

The Pope typically sits in the front row of business class, with the entire row to himself. 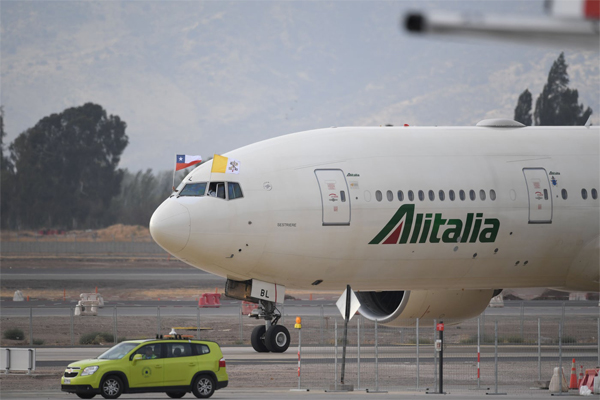 These Alitalia aircraft carrying the Pope all get a special flight number, AZ4000. Sometimes it also gets the call sign Shepherd One, for example when Francis visited the United States in 2015.

Flight numbers 4000 and above are reserved for special, non-scheduled Alitalia flights. For example, when the 777-200ER that had flown Francis to Abu Dhabi returned to Rome empty, it bore the flight number AZ8033.

Upon landing, pilots open the cockpit windows and display the flag of the country being visited, alongside the Vatican’s flag.

On shorter flights, the Pope flies on an Alitalia single-aisle Airbus jet, like the A320 or A321. And to navigate even smaller distances, the Pope travels in a helicopter operated by the Italian Air Force, most frequently an Agusta Westland AW139 also used by Italian government officials.

While many have considered Pope Francis a man of the people, he still flies up front in business class.

The Pope and his top advisors sit in Alitalia’s lie-flat seats, but the traveling press are relegated to coach.

The Vatican actually does not burden Italian taxpayers with the cost of his travels.

The Alitalia offers a discounted charter rate to the Pope. The journalists that travel with him pay their own fare. They are made to pay for Business Class fare. This enables them to gets them prime access to the pope, however, they have to be seated in the  economy aboard the aircraft.

This arrangement helps to subsidize the price tag of the flight, which the Vatican charters from Alitalia. Pilots and flight attendants are employees of Alitalia as well.

The only time the Pope grants interviews to reporters is while he is about the AZ4000.  As such, the plane’s coach cabin is typically filled with journalists from international newspapers, magazines and television networks.

The Pope Francis typically spends time on board bantering with the journalists and giving blessings in the coach cabin. 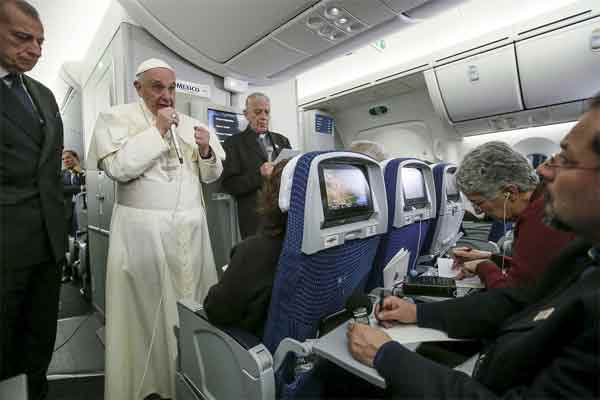 Onboard, journalists find Pope Francis’ coat of arms on the seat’s headrests.

It may be tradition for the pope and papal staff to fly Alitalia from Rome, and it is also a custom that when departing from wherever they have been, they will fly that nation’s flag carrier back to Italy. 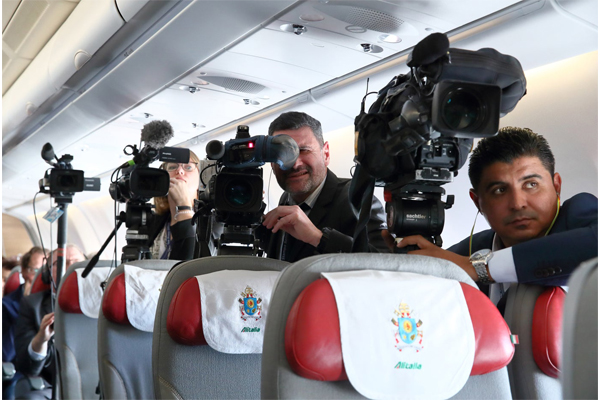 These flights only occur if a country’s airline is deemed safe, if the airline has extra aircraft available and if there is even a carrier at all.

The pope flew Alitalia back to Rome after his visits from Kenya, Uganda and the Central African Republic; the latter two countries do not have a long-haul airline. 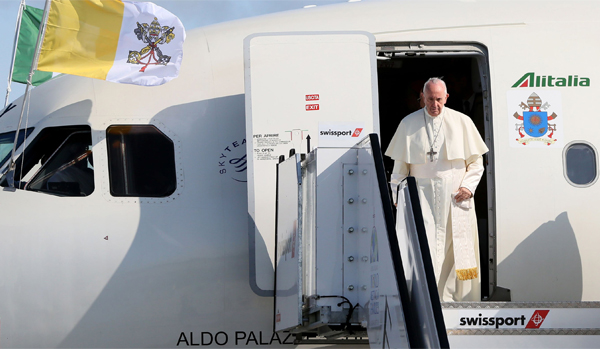