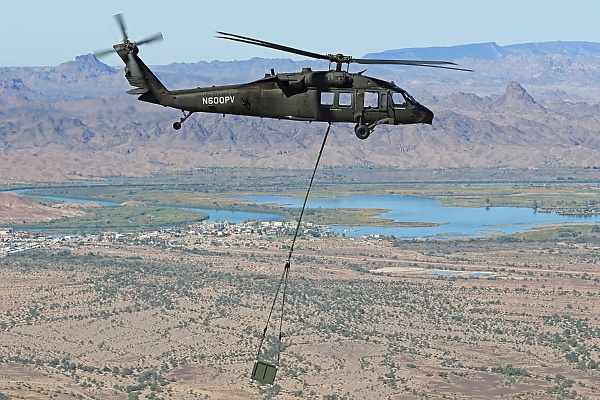 The missions without a pilot was conducted by U.S Defense Advanced Research Projects Agency (DARPA) and Sikorsky.

Goal of the mission is to give commanders more flexibility when faced with constraints like casualties or battlefield hazards.

Flight control software that enabled the pilotless operations was built by Sikorsky, the manufacturer of the UH-60 Black Hawk.

DARPA and Sikorsky said on 2 November that the Black Hawk helicopter completed three autonomous flights on Oct. 12, 14 and 18, 2022, at Yuma Proving Grounds in Arizona, under U.S. Army’s Project Convergence 2022 experiment.

During the three autonomous flight missions, DARPA said that the helicopter delivered large quantity of supplies by flying low and fast above the ground and a rescue mission with no pilot on board.

The goal of the mission is to give commanders more flexibility in the face of constraints like casualties or battlefield hazards, according to Stuart Young, programme manager with DARPA’s autonomous flight initiative.

“We can go to one pilot, where you may not have enough pilots for some missions, or we can go down to no pilot. We realised that the pilot’s workload needed to be reduced,”

Sikorsky, which builds the UH-60 Black Hawk used in the experiment, also developed the flight control software, which it calls Matrix, to enable pilotless operations.

An autonomous Black Hawk retrofitted with Sikorsky MATRIX autonomy technologies was first flown without pilots aboard on February 5th, and again on February 7th 2022.

During the two flights, the Black Hawk, which usually requires two pilots, completed 30-minutes of uninhabited flight over the U.S. Army installation at Fort Campbell, Kentucky.