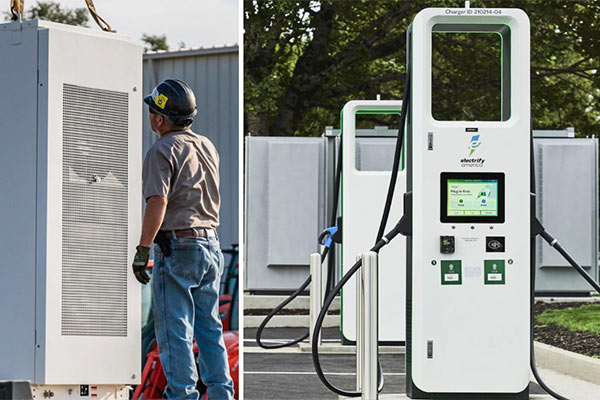 In 2019, Tesla and Electrify America announced a deal for the deployment of Powerpacks at more than Tesla’s 100 charging stations.

Volkswagen Group of America-owned Electrify America has announced that it has now deployed over 30 MW of battery capacity using Tesla Powerpacks at over 140 charging stations.

In 2019, Tesla and Electrify America announced that they reached a deal for the former to deploy Powerpacks at more than 100 charging stations operated by the latter.

“Electrify America today announced that it has installed onsite, behind-the-meter battery energy storage systems (BESS) at over 140 ultra-fast DC charging stations around the country, including more than 90 installations in California.

By adding the batteries, Electrify America hopes to lower their demand charges and deliver more stable pricing to customers. Demand charges are a higher rate than electric utility charges when a user’s electricity needs a spike.

It can be extremely costly for electric vehicle charging networks considering the nature of their electricity needs – a station can see minimal use for most of the day and then have several EVs show up to charge at once.

When first announcing the deal with Tesla, Giovanni Palazzo, president, and chief executive officer at Electrify America, said some utilities will charge them as much as $30 to $40 per kW in demand charges.

“We are constantly striving to introduce innovations that will drive the EV industry forward. With this significant deployment of battery energy storage, Electrify America will be able to help ensure a more efficient customer experience, especially as EV adoption increases and infrastructure demands continue to grow.”

Electrify America has also announced that it is working with Olivine to offer behind-the-meter grid services with its energy storage and vehicle-grid systems: