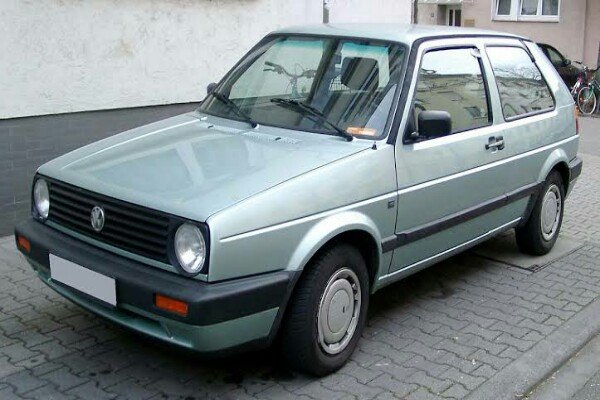 “Umm…. Schoolboy, this your motor is strong o, Na golf” Hassan said, eyeing the green volkswagen golf-2 I bought the previous day. He would in a short while become my driving tutor.

I had bought the car for about 2 month’s salary and as can be expected for a car that cheap, everything and anything that could probably be wrong with the car was definitely wrong. It has 2 doors, the engine smokes, the steering was loose, the gearbox grates, the manual window winders needs two hands to operate, the exhaust was busted, the brakes was spongy, bald tyres… But I don’t care, I want a car. Any car. So I bought it from a neighborhood uncle that was probably surprised anyone will buy a jalopy that bad. It was similar to this picture but in much worse shape.

Hassan was our house Mai-guard, he also does shoe repairs at his kiosk located at the gate to supplement his income. He calls me Schoolboy, not minding that I left school the previous year.

I had gotten my friend to drive my newly purchased car down and parked it in front of Hassan’s kiosk. On his way out, my Dad had taken a look at the car and shook his head in bewilderment. He asked me ‘how much did you buy that “thing”?
‘Fifty thousand’ I replied. He silently entered his Sienna and drove out.

Hassan was inquisitive, “So? You sabi drive ehn?”

I got in the car and connected the wires (It came without ignition keys).

The car roared to life and promptly gave me and Hassan an idea of what a smoke bomb does to visibility and respiration. I beamed with contentment as I revved it a few times.

Next morning, I got to wash “my car” I found out that water leaks through the windscreen mountings and no matter how much water I used to wash the wheel wells, it stays dirty. No problem, I wiped it dry, started it and promptly gave Hassan another dose of thick smoke.

‘Come inside’ I invited Hassan.
“No, na u go learn driving, ah go teach you from here”.
‘OK o’ I consented.

“Oya na, put am for gear 1” Hassan shouted over the noise of the roaring engine.
‘Hmmm’
“E no hard, put am”

I’ve watched Dad change gears countless times while driving, so gear location and changing is not new to me.

Hesitantly, I depressed the clutch and the gear reluctantly went into 1 accompanied by a sound similar to an industrial pepper grinding machine.

It was early morning and the road was clear. I gingerly released the clutch. The car did not jerk, it moved slowly down my deserted street.

Hassan was standing outside and started walking along with my slow moving car. I increased the throttle a bit to increase the pace.

I attempted to drive a straight line down the street, making more of an S-curve as I tried to make do with the loose steering, thereby overcompensating my course corrections.

Hassan changed into a jog. Then, over the din of the engine, he shouted change into gear 2.
I effortlessly did and his jog became a run.
‘This thing is not hard’, I thought to myself. We got to the end of the street. Hassan was by now sweating.

Then, my problem began. The car won’t enter into reverse. I twisted and turned, I jiggled and wobbled the gearstick. No show. The gear will make a ‘craahgggh’ sound and… Nothing.

We pushed the car back for me to be able to make U-turn.

I started back to our house. Hassan would not sit in the car. He was jogging alongside me. Outside!
He shouted his instructions over the noise of the car. “Press the throttle na… E no hard… Press am… Change into gear 3!”

I did and gassed the car a little. Hassan was now sprinting alongside me. That was when I decided to ask him..
‘Do you know how to drive?’
“No!” He shouted back!!!
My driving tutor doesn’t know how to drive!

I was in gear 3. Hassan has dissapeared into the smoke I left behind as I approached our gate.

How do drivers know where their tyres are?! I wondered. I took my feet of the throttle pedal and tried to line up the car as close to Hassan’s kiosk as much as possible. I cautiously pressed on the brake. Nothing! I pressed again. Nothing! The brakes has failed!

Hassan’s kiosk was basically four wooden poles topped with a zinc roof, with two small benches and a table underneath.

I nipped one of the poles with my bumper. The zinc roof fell on my bonnet. One of my front wheels ended up in the gutter.
Again,  How do drivers know where their tyres are?!!

Hassan caught up with me. He had a broad smile on his face. “you see, e no hard! no worry, I go repair my shop”

Next morning, Dad told me to make enquiries about nearby driving schools, adding ‘before you kill yourself and Hassan’.

I taught Hassan how to drive about 6 months afterwards. He changed my name from ‘Schoolboy’ to ‘My friend’ and the car changed from ‘your motor’ to ‘our motor’.

Remind me to tell you about the other time Hassan and me had to push the car from Maryland to Abule. In the rain.