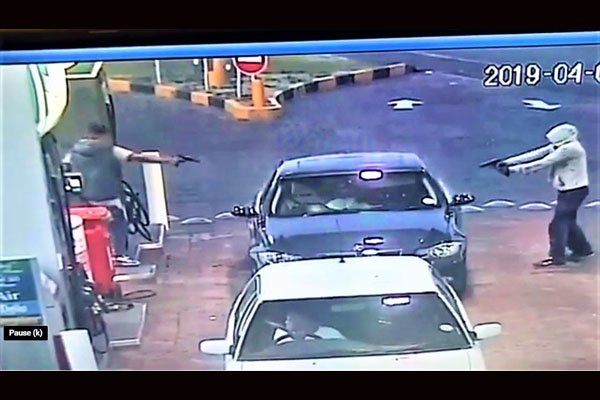 The tragic event occurred over the weekend.

It was captured by a CCTV camera at a fuel station at the Caltex garage in Kenilworth in Cape Town, South Africa.

The CCTV footage showed gratuitous gun violence and the execution of a man inside a BMW.

The public execution of the motorist is believed to be gang-related.

The man inside the BMW pulls into the station and parks next to a petrol pump. He opens his window and begins a dialogue with someone just out-of-shot on the driver’s side.

Then, two of the shooters – one wearing a grey hooded shirt and the other a black gilet – emerge from behind the tanks.

They dash towards the car and began firing their pistols at the driver from point blank range.

The shots fired at the target went on for long, ostensibly to ensure that the victim did not survive the attack.

Reports confirmed that the attackers were later apprehended.

In total, four people were arrested and two firearms were recovered.

Watch the graphic video below;