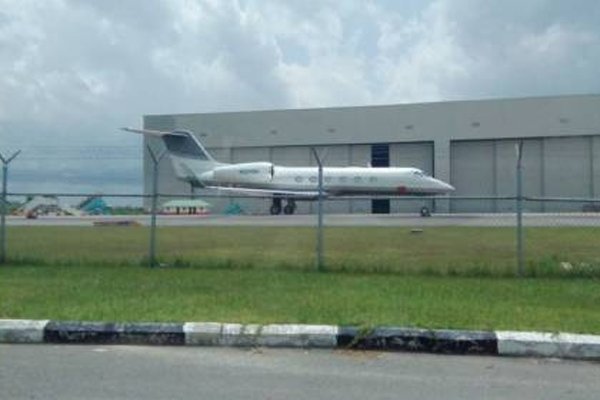 Six years after the construction of the Maintenance, Repair and Overhaul (MRO) facility by the Akwa Ibom State Government, the facility is yet to be put to use by the country.

The project cost the state government about $100m to construct and equip.

The facility, commissioned in December 2012 by Godswill Akpabio when he was Governor, was to cater to maintenance on Boeing 737 aircraft, which is about 70 per cent of commercial airplanes by indigenous airline operators, Airbus and Bombardier aircraft.

A source close to the state government told SaharaReporters that the government initiated the project as a joint venture with the Federal Government, but the government at the centre during the construction of the project refused to fulfill its own part of the agreement and didn’t provide the rewuired counterpart funding.

A government source in Akwa Ibom told our correspondent that the state government had planned to reduce capital flight with the construction of the facility, but was surprised at the turn of event.

It was gathered that Akpabio, as Governor, had travelled to Canada in search of a technical partner but could not secure any before he left office, while the current state government has shown little or no interest in the project.

“The State Government spent about $100m on the construction of the MRO facility. At the initial stage of the project, it was supposed to be a partnership between the state and federal governments; the government was expected to deliver its own counterpart funding to the contractors, which never happened.

“The facility is huge and can take two wide body aircraft, Boeing 747s or four Boeing 737s, with all the dormitories, the spacing and the equipment and all the configurations that will make for effective aircraft maintenance. But it is rotting away in the country while our airlines go abroad for aircraft maintenance.”

Further investigations by our correspondent revealed that in 2016, global MRO spend by airlines was $65bn, with $3.2bn of the funds from African airlines and $1.1bn by western airlines.

The breakdown of MRO markets indicated that North America had 30 per cent, Asia Pacific 28 per cent, Europe 26 per cent, Middle East and South America 6 per cent each, and Africa a paltry 4 per cent within the period.

Engr. Charles Ajayi, an viation professional and member of the National Association of Aircraft Pilots and Engineers (NAAPE), lamented that six years after completion of the facility, it is yet to be put to use.

Ajayi said that the usage of the MRO would have gone a long way in creating a conducive environment for players in the industry.

He also explained that for Nigerian airlines to measure up to their foreign counterparts, the government has a major role to play just like other countries like the United States of America (USA), United Kingdom, India and China have done in recent times.

The construction of the MRO facilities, Ajayi noted, would create jobs for professionals in the industry while increasing the country’s Gross Domestic Products (GDP).

“The government really needs to assist, but every time we talk about this, people will say it is capital intensive and they can’t go into it. But the issue is, how did the other countries realise the importance of such facilities, and went into it?

“The Federal Government had at some point shown interest in the maintenance hangar and wanted to make it a national hangar, and it was also part of the John Obakpolor recommendation, which came shortly after the Dana Air crash.

“Some people have come to look at it, like Lufthansa Technik and some groups are beginning to talk to the state government. But, of course, this opportunity was also thrown open to Bombardier because Bombardier has over 40 aircraft in the country right now, so the facility is a major hangar for aircraft maintenance. So we need collaboration. This is a big facility waiting for Nigerians to take advantage of.”