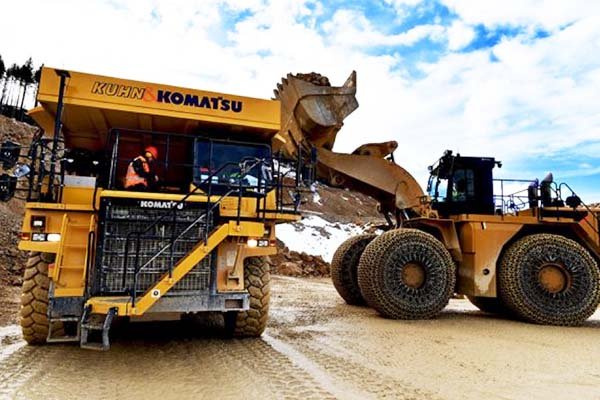 This 45-Ton All-Electric Dump Truck Will Be the World’s Biggest. Komatsu HD605-7 quarry hauler with a tipping trailer has a diesel-fuel capacity of 206 gallons. Some engineers in Switzerland want to change that to zero gallons. With funding from the Ciments Vigier cement-production company, battery supplier Lithium Storage and construction equipment supplier Kuhn Group are working together to create an all-electric mining truck that not only eliminates diesel emissions, but potentially creates energy to add back into the grid as well. They’re calling it the E-Dumper.

Goofy name aside, the project starts with a used Komatsu HD605-7, which typically uses a turbocharged direct-injected six-cylinder diesel engine that makes 715 horsepower and 2452 lb-ft of torque. Powering a vehicle that has tyres that are taller than a standing human, the diesel-powered Komatsu has a top speed of 44 mph. But speed is not of concern for these vehicles, and certainly not for this application. Range and efficiency are. The builders of the E-Dumper claim it will be the biggest battery-electric vehicle ever created and will house the biggest electric battery pack a vehicle has ever seen. The hopeful claims even go as far as to predict that the truck will produce an energy return that can be dumped and stored after each work day.

The E-Dumper, which Ciments Vigier expects will have a work life of about 10 years, will have a battery pack that can store up to 700 kWh (theChevrolet Bolt EV, by comparison, has a 60-kWh battery). The pack is expected to weigh up to 4.5 tons and house 1440 nickel-manganese-cobalt cells. The electric powertrain will be responsible for getting the massively heavy truck up into a mountain quarry and down to a cement production facility in a valley about 20 times a day. And that’s what makes this whole thing interesting. Vigier will be relying on one technology for this entire operation to work: regenerative braking.

Rather than utilizing traditional friction brakes, the E-Dumper will be coasting down the mountainside under the control of regenerative braking, one of the key components of most electric vehicles. When the truck rolls down with its total mass of up to 110 tons, the system will be recouping large amounts of energy. Vigier is counting on the energy needed to get the unladen dump truck, which will weigh approximately 45 tons, up the mountain to be less than the energy that is stored from the regenerative braking going down the mountain and back to camp. If that is the case, it will be an energy-plus vehicle that could generate an excess of 10 kWh per trip. If that’s correct, that would be about 200 kWh generate per day per vehicle, or 1600 kWh total per day if the company reaches its goal of eight electric Komatsus.

This is all speculation at the moment; none of these numbers have been tested yet. But it has attracted engineers and support from the Swiss Federal Institute of Materials Science and Technology, the Bern University of Applied Sciences, and the Swiss Federal Office of Energy. If it works, it could pay huge dividends not just for the Swiss, but for the entire commercial industry.