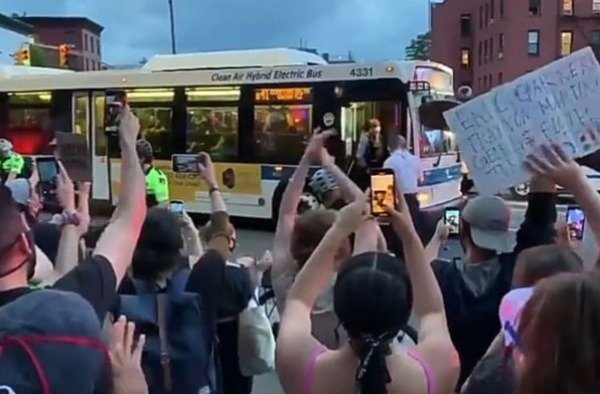 Protesters in Brooklyn applauds bus driver for refusing to help US police to drive arrested people to station.

The city bus driver was also lauded by his union, saying he works for the people, and not the police.

A driver refused to drive anti-police protesters away from their rally in Brooklyn after police commandeered the bus and started loading it with people who had been arrested.

According to reports, the bus had several passengers on it when police blocked its path and started pushing arrested people onto it.

The bus driver’s action was in solidarity with those protesting the murder of George Floyd.

The 45-year-old African-American died in police custody after a white Minneapolis officer knelt on his neck for almost 9 minutes.

A trending video shows protesters applauding the City bus driver for his action.

The driver was also lauded by his union on Friday night, saying he works for the people, and not the police.

It’s not the first time that bus drivers have refused to help the police during the nationwide protests.

“TWU Local 100 Bus Operators do not work for the NYPD. We transport the working families of NYC. All TWU Operators should refuse to transport arrested protestors.”