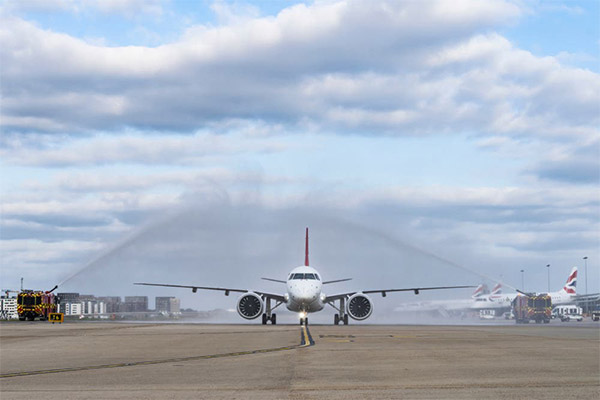 The Embraer E190-E2 aircraft was greeted with a water cannon salute from the airport’s fire service.

Passengers aboard the flight were also treated to a commemorative luggage tag. 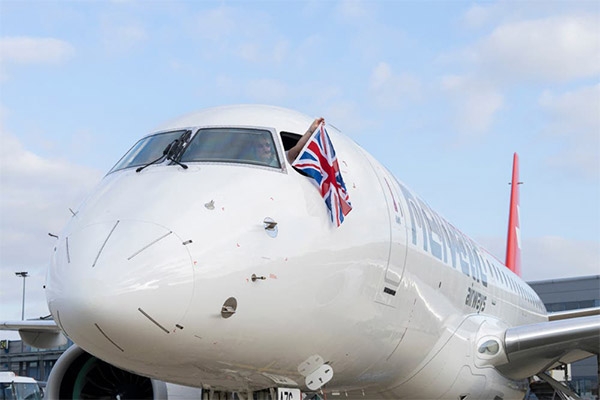 Following its recent steep approach certification, the Embraer E190-E2 has touched down on its first commercial flight at London City Airport.

This is not only a milestone for Embraer and for Helvetic Airways, who operated this first flight; it’s also a crucial moment for London City Airport, as it has bet its future growth on this game-changing aircraft.

Touching down at just after 17:45 on Wednesday, the first revenue service of an Embraer E2 was greeted with an appropriate level of celebration.

The jet, an E190-E2 operated by Helvetic Airways, is the first to arrive at the central London airport following the types’ certification last month. It was greeted with a water cannon salute from the airport’s fire service, while passengers were treated to a commemorative luggage tag.

Almost every seat on the flight was sold. For most of the passengers, it was a welcome return of a route that has been suspended since April 2020 (save for a handful of flights in May and June last year) due to the COVID downturn. Prior to that, the route was served by SWISS with its Airbus A220.

But with passenger demand still relatively thin, the lower capacity, highly efficient E2 is the ideal aircraft to restart the service. 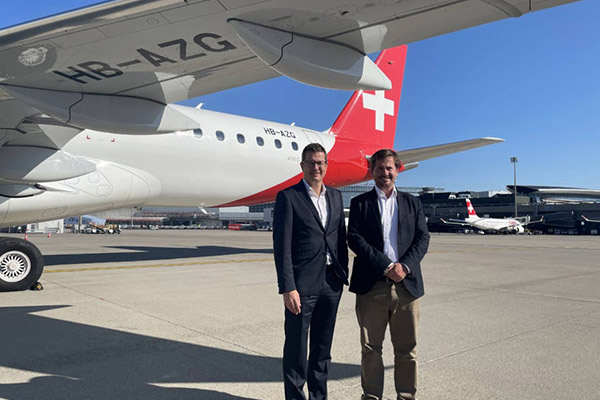 London City remains a key airport for the UK’s capital, particularly for business travelers. The arrival of the E2 marked a significant milestone for all parties involved in the certification, with everyone in attendance to mark the occasion.

Onboard the flight was Helvitic’s own CEO, Tobias Pogorevc, as well as the CCO for London City Airport Richard Hill. Waving the flight off in Zurich were guests, including Embraer’s VP Sales And Marketing for EMEA Cesar Pereira.

The coming together of the three parties was something of a holy trinity of outlooks. It’s a rare treat to have OEM, airline and airport all in the same place at the same time, and illustrates just how important this launch was to all involved.