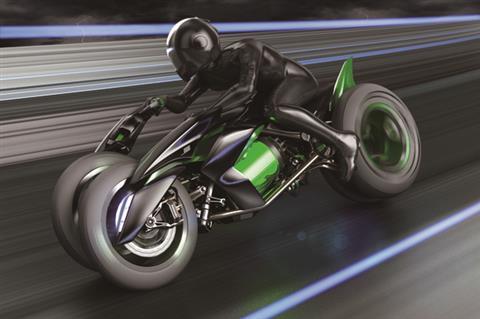 Kawasaki has revealed a stunning futuristic superbike that can transform a high-speed racer to a three-wheeled cruiser at the flick of a button.

The J Concept superbike is a personal mobility system of the future that adapts to the type of travel required.The idea for the radical bike was first hinted five years ago at the Tokyo Motor Show.

While in sports mode, the suspension pulls the front two wheels together, drawing the rider lower down over the motor and giving it a racer-like appearance.

But when the rider shifts to town-touring mode, the front two wheels separate, the seat rises and the foot-pegs drop, allowing the rider to sit upright while cruising.

The transforming superbike isn’t the first bizarre concept to be proposed recently.

In September last year , Honda debuted its smart superbike that uses robotics to balance itself.

The Japanese manufacturer claimed the tech could save bikers lives and the motoring industry billions of pounds.