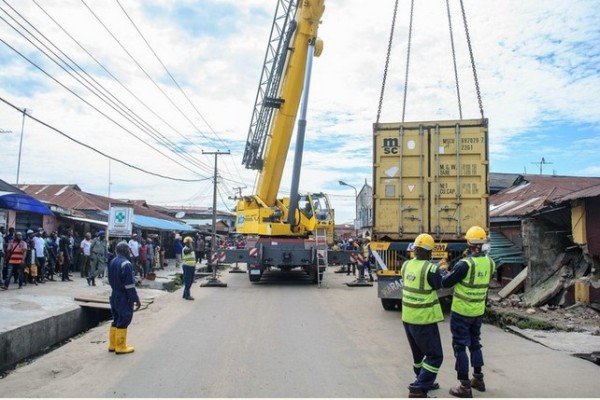 The Lagos State Emergency Management Agency (LASEMA) has reiterated the need for active collaboration, increase in synergy, information sharing as well as regular meetings amongst stakeholders to enhance proper coordination, increase effective emergency response as well as build the resilience of communities during an emergency intervention in the State.

The Director-General/CEO, Dr. Olufemi Oke-Osanyintolu disclosed this during a working visit to the Headquarters of the Rapid Response Squad (RRS) of the Lagos State Police Command in Alausa, saying that lack of coordination and cooperation among stakeholders could be a form of hindrance to the success of emergency management and intervention in the State.

According to him “Effective preparation requires close coordination among stakeholders, while effective coordination itself implies the understanding of stakeholders regarding each other’s roles before an emergency occurs, elements of command and control, communication, dispatches/deployment and a clear-cut incident command structure. All these give credence to a single-chain of command where roles and responsibilities of stakeholders are clearly defined before during and after emergency/disasters in the State”.

The LASEMA Boss explained that the Agency is the umbrella body saddled with the task of coordinating the activities of relevant agencies in prevention and management of disasters in the State, as such it needs to solicit for necessary support from security agencies such as the RRS of the Lagos State Police Command.

While highlighting some of his Agency’s agenda in line with the vision of Governor Babajide Sanwo-Olu, especially in the area of adequate safety of lives and properties, Osanyintolu noted that in consonance with the LASEMA Law of Lagos State of 2015 as (Amended) by the Law 2011 for the establishment of Zonal Rescue Coordinating Centre, the Agency has established Zonal Rescue Coordinating Centres, located in the three Senatorial Districts of the State for adequate and quick response to any form of emergency/disaster.

The Director-General also disclosed plans to revamp its operations on Lagos State waterways to compliment the efforts of the State Waterways Authority (LASWA), the Marine Police and other relevant stakeholders to ensure adequate safety of the commuting populace of Lagos water, with the establishment of Aquatic Response Unit at the Lekki Response Unit by the Lekki/Ikorodu linked bridge to further strengthen the presence of the agency on the waterways as well as reducing response time to scene of emergencies on water in Lekki and environs.

While seeking for the continuous support and protection of all emergency responders from the activities of hoodlums, he noted that the Agency will continue to organise forum and platforms for emergency/security operatives to collaborate before, during and after emergencies such as stakeholders meeting, simulations exercise as well as training for effective disaster management in the State.

In his welcome address, the Commander, Rapid Response Squad (RRS), DCP Olatunji Disu, called on LASEMA to sustain the relationship with other emergency agencies, while assuring him of the squad readiness to strengthen the bond amongst first responders in order to ensure that lives and properties are protected.

Would Governor Sanwo-Olu Continue This Project Started By Ambode? (PHOTOS)