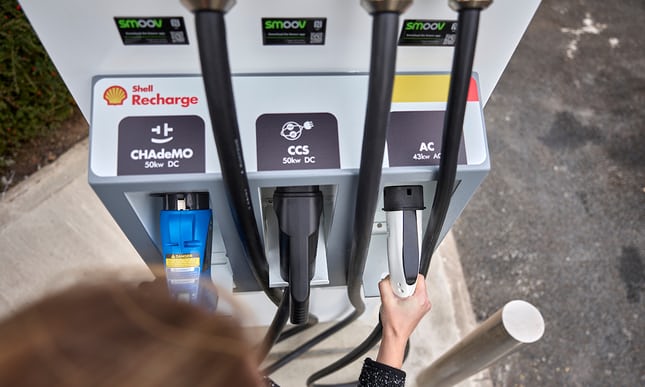 Shell is opening a first wave of electric vehicle charging points at its UK petrol stations, as it prepares for shift away from petrol and diesel

Drivers will be able to recharge 80% of their battery in half an hour at forecourts in London, Surrey and Derby from this week, with a total of 10 service stations to be equipped with rapid chargers by the end of the year.

The move marks the Shell’s first step into the UK electric car sector and comes days after the Anglo-Dutch oil company bought NewMotion, a Dutch firm with 30,000 private charging points at homes and offices in Europe.

Shell said the forays into charging were spurred by the swift growth in battery-powered cars, which now number more than 115,000 in the UK, up from almost zero a decade ago.

“There’s no doubt the electric vehicle market is developing fast. And we want to offer customers choice: it doesn’t really matter what kind of vehicle they’re driving, we want them to drive into a Shell station, refuel in whatever capacity the fuel is,” said Jane Lindsay-Green, UK future fuels manager at Shell.

The NewMotion acquisition and service station charging points could prove an important hedge by big oil against the impact of electric cars, which experts said this week would cause petrol demand to peak by 2030.

“We want to make sure we are positioning ourselves for the future,” said Lindsay-Green, who described the two schemes as complementary.

Shell acknowledged it was taking baby steps into the market, with just 10 out of its 1,000 fuelling stations in the UK adding charging points to begin with.