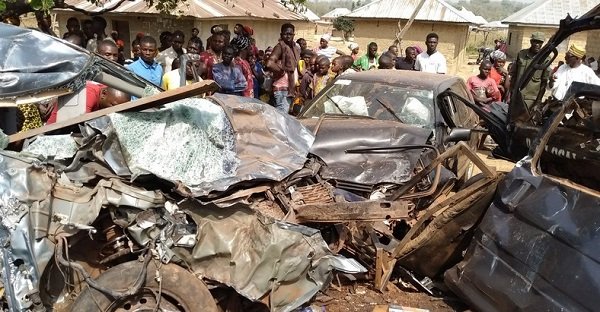 How A Speeding Truck That Suffered Tyre Burst Claimed 13 Lives On Lagos-Ibadan Expressway.

No fewer than 13 persons lost their lives, while 10 others sustained injuries in a multiple accident around Saapade, near Ogere on the Lagos-Ibadan expressway, on Wednesday.

Mr. Clement Oladele, Sector Commander, FRSC In Ogun State, confirmed the incident to NAN in Abeokuta. According to Oladele, the crash happened at Saapade, where there is a road diversion.  The cause of the accident is  a speeding truck heading towards Lagos, but suddenly suffered a tyre burst.

In the process, the truck collided head on with two other speeding commuter buses heading towards Ibadan, with one of them, in the process, attempting to wrongfully overtake within the diversion area.

The accident happened as a result of the recklessness of a driver. Adhering to maximum speed limits, and not overtaking recklessly could have prevented this speeding truck from claiming lives.

Volkspod: These Mini Bikes Were Built From The Parts Of Original Volkswagen Beetle (Photos)