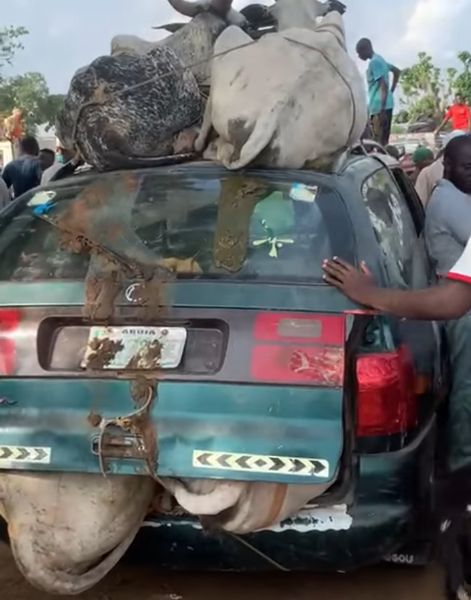 The truth is large animals like cows are not usually transported this way.

Hiring a pickup truck at the market is surely the best way to ferry the poor cows. 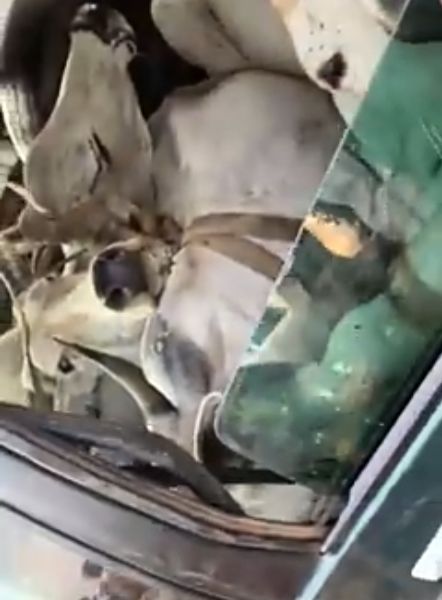 It’s a known fact that exceeding a car’s payload capacity will damage its suspension. In addition, overloading also makes the car less stable and makes the car more difficult to steer.

But this doesn’t seems much of a concern for a transporter in Abuja after using his Volkswagen Sharan station wagon to carry the unthinkable — seven full grown cows.

In a video shared online, at least five (5) cows were crammed in the luggage area and rear seats of the vehicle — we are talking about a space that will readily carry 6 bags of rice.

Two ‘distressed’ cows were also seen fastened atop the station wagon. This scene shows what the whites calls “Animal Cruelty” and it visibly left onlookers shocked. The question on their minds was how they managed to load the over 3,500kg animals into the ‘tiny’ space.

With a gross vehicle weight rating of 2,370kg, Volkswagen recommends a maximum payload capacity of 642kg for the 1,728kg Sharan.

Normally, large animals are not usually transported this way. Hiring a pickup truck at the cow market is surely the best way to ferry the poor cows.