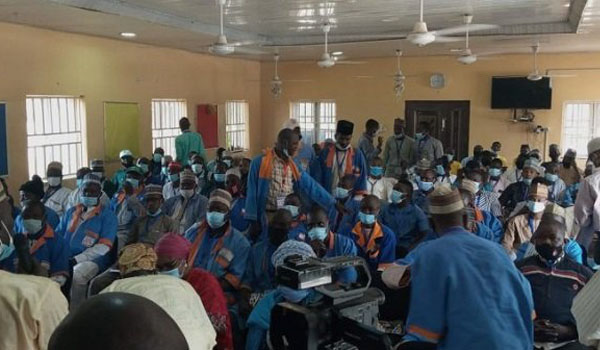 300 auto technicians across the six geo-political zones have been trained on repair of heavy-duty vehicles.

The Federal Government through the National Automotive Design and Development Council (NADDC) facilitated the training.

The Director-General, NADDC, Jelani Aliyu, said the training was aimed at upgrading the knowledge of the trainees. He made the statement on the occasion of the graduation of 150 participants in Kano on Friday.

The participants at the two weeks training in Kano were drawn from all the geo-political zones in the North.

Aliyu said that the training came at the time when there was the need to upgrade technicians in the country. The upgrade was needed to handle the challenges of technology on modern heavy vehicles.

According to him, all the participants will be provided with empowerment tools and certificates to encourage them.

He said NADDC’s intervention was aimed at developing the capacities of heavy duty. Those to benefit are auto mechanics, auto electricians and other auto auxiliary services in Kano and other Northern states.

Aliyu said: “In recent times, there have been outcries on the rising cases of road traffic crashes involving heavy duty vehicles. The vehicles include tankers, trailers and other heavy duty vehicles across the country. With these accidents comes its attendant losses in human lives and property.

“The council, therefore, planned and conducted this skills upgrading for technicians working on such vehicles. This is part of the council’s contribution toward nipping the problem in the bud.

“With the completion of this training in Kano today, about 300 technicians drawn from the six geo-political zones are now better individuals with admirable skills in a very interesting and important sector which is the automotive sector.

“It is, therefore, with a deep sense of fulfillment that I felicitate with you for successfully completing this training.

According to him, it is important for everyone here,  to know that technology in the auto sector advances continually and at a very fast pace.

“Most heavy duty vehicles today are built with a lot of electronically-controlled systems. The only way to meet up with this advancement is training and re-training. auto technicians

“Fortunately, such is also one of the focal elements of Nigerian Automotive Industry Development Plan (NAIDP). That project is being driven by NADDC.

“I want to believe that this two-week training has helped in no smaller way to improve your knowledge of modern heavy duty vehicles, its components and maintenance,’’ he said.

Some of the participants praised the Federal Government for organising such training, saying it will go a long way toward boosting their knowledge on how to handle modern heavy vehicles.

Malam Abdulhadi Husaaini, a trainee, said the training came at the right time when technologies were improving in the world, giving assurance to make proper use of it.

Mr Godwin Ameh, another trainee, said that such training should be organised every six months to help in reducing unemployment among the youth.

Why International Airlines Are Not Flying Into Enugu Airport, By FAAN