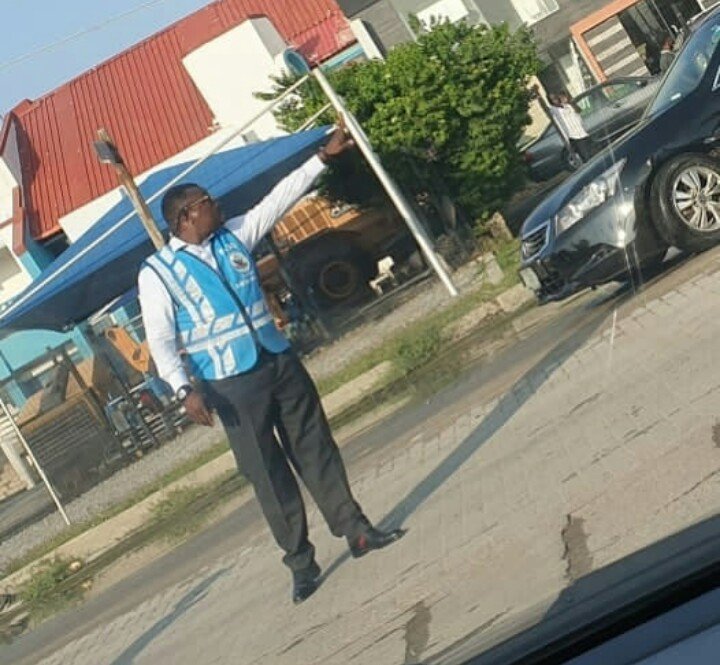 Comedian Alibaba, yesterday, was trapped in traffic for almost about 35 minutes. When he noticed that the situation wasn’t getting any better, he stepped down from his car, put on his FRSC special marshal regalia and began helping out to de-congest the traffic.

After three hours of serving as traffic warden, the ace comedian took to Instagram to explain how we are the cause of our problems.

He explained what caused the traffic jam and what he did to remedy the situation. He went further with a suggestion to the governor-elect of Lagos State, Babajide Sanwo-Olu. He talked about how the governor should just invest in CCTVs at major and busy junctions to make extra N200billion to develop Lagos.

He talked about how every car should have a registration number linked to the BVN number of the owner and how traffic fines should be directly deducted from offenders’ accounts.

We were able to get all he wrote from his verified Instagram account. Take your time to read and understand.

Spent 3 hours today… and came to the conclusion again, that we are the cause of our problems.
After the #tdwcafrica2019 at Landmark, I was on the road linking Ligali, going back to my office and noticed there was a gridlock.

My driver said it will soon clear. When soon turned to 35 minutes, I came down and walked through the vehicles to see the cause of the HOLD UP was.

4 lanes coming from Ligali towards Landmark and 5 lanes filtering onto the end of Ligali. Plus traffic from 3 streets pouring into the same road. The little spaces inbetween cars were all taken over by okada riders. While the spaces wider than those okadas could squeeze through had been pegged close by keke Napep.
Managed to merge 4 lanes to 2 and 3 lanes in the opposite direction, to form 1 lane, just to decongest the gridlock. Worked. And after 2 hours, decorum had resumed.
Hmmm.

A thought hit me. If @jidesanwoolu wants to make extra N200b to develop Lagos, he should just invest in CCTVs at major and busy junctions. With STOP signs to boot. Borrow money fix the roads and drainages. Then set up a system that will get drivers and vehicles to be linked together. When you are caught on tape, beating the traffic lights or breaking traffic laws, you will just get the alert that the payment has been deducted from your account.

To make this work, each car will have its registration number linked to the BVN of the owner. No need to set up any other means of collecting the money. And if you sell the car, you must go to the licensing office to change the BVN. Failure to do that means whoever drives the car and commits an offence, will not be debited. The original owner pays.
If it’s a military vehicle, the debit comes from the military account. Same with corporate bodies.

Individuals too. You can imagine Oga is sitting at home, in Ikoyi, and he gets a debit alert for traffic infractions in Lekki PHASE 1, N45,000. How? He will call the driver or whoever is with the car. Kilode? “I beat red lights sir”. Just sack yourself.
And it doesn’t matter whether you have money in the account. The account will be on debit. Any day money comes in it will be deducted with interest.
No traffic

Do you think adopting these methods will go a long way in curbing the traffic insanity in Lagos state? Again, is that amount he stated feasible?