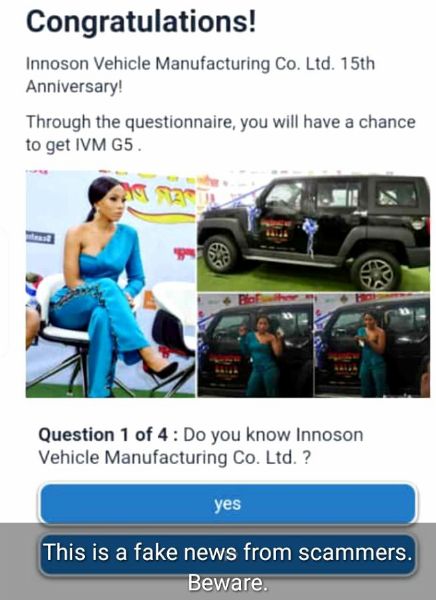 Innoson debunks the “Fake News” being circulated that it is giving away SUV, cash, among others as gift to mark its 15th anniversary.

IVM says it disassociates itself from the notification being sent as well as activities in connection with the fake news. 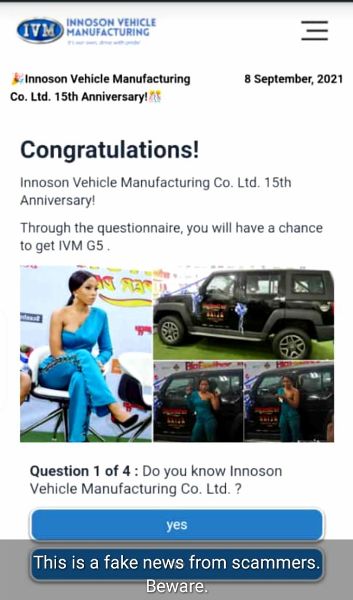 Innoson Vehicle Manufacturing (IVM) has debunk the “Fake News” being circulated on social media platforms that the indigenous company is giving away SUV, cash, among others as gift to mark its 15th anniversary.

In a statement released by the corporate communications head of the company, Cornel Osigwe, IVM warned the public about the fraudulent notification asking them to answer a “questionnaire in the name of winning a raffle.” 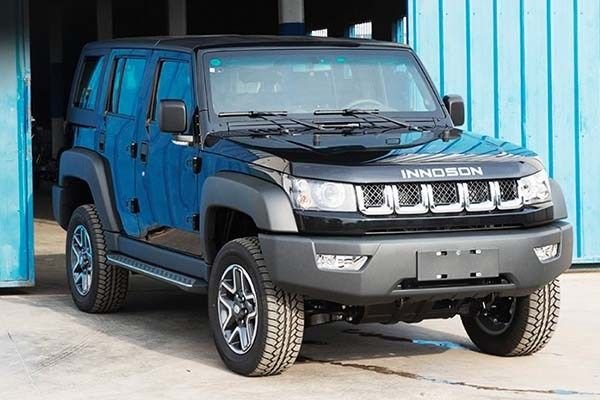 Fake News : Innoson says it is not giving SUV, cash as gift to mark 15th anniversary

“We have received notice of a generate link with the caption ‘Innoson Vehicle Manufacturing Co. Ltd 15th anniversary!

“Please be advised that any such notification is fraudulent and we have not authorised any agency to act on behalf of IVM in any capacity.

“Innoson hereby disassociates itself from this notification and activities in connection to it. IVM has no relationship whatsoever with this link or any of its agents or affiliates.

“Members of the public are hereby notified that Innoson does not and will not require anybody to respond to such questionnaire in the name of winning a raffle. All activities of our company is on our official website.”