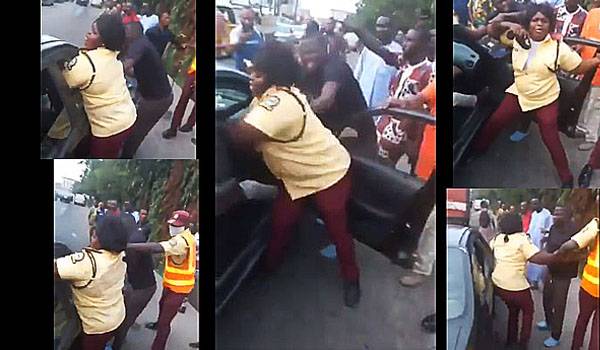 A viral video of a female LASTMA official physically assaulting a motorist is currently making the rounds.

In the video, the LASTMA official, who had forced herself inside the car, was seen wrestling with the driver. She later exited the car and continued in the savagery by exchanging blows with the occupant of the car.

There were failed attempts by onlookers and one of her colleague to calm the very ruffled road traffic manager.

The presence of onlookers recording the show of shame with their cameras did nothing to calm her down.

The event occurred on the Adeniyi Jones Avenue axis of Ikeja on Friday.

The Lagos State Traffic Management Authority (LASTMA) has summoned the female officer over her unruly display she had with a passenger in a vehicle.

According to the agency, the officer acted out of line regardless of the circumstances.

She is, therefore, expected at its headquarters on Monday for investigation and disciplinary action.

“This video was forwarded to the management and the officer has been invited for investigation and disciplinary action for misrepresenting the agency. The incident occurred at Adeniyi Jones Avenue, Aromire junction off Awolowo Way, Ikeja on Friday, 11th September.

“She is considered to have overreacted, regardless of the circumstances. She is expected at the headquarters on Monday, 14th September,” LASTMA spokesman said.

Lagos State Traffic Management Authority is a Lagos State-owned agency under the Ministry of Transportation. The agency was established on the 15th of July, 2000 to transform the state transportation system to ensure free flow of traffic in the state and also reduce road accidents.