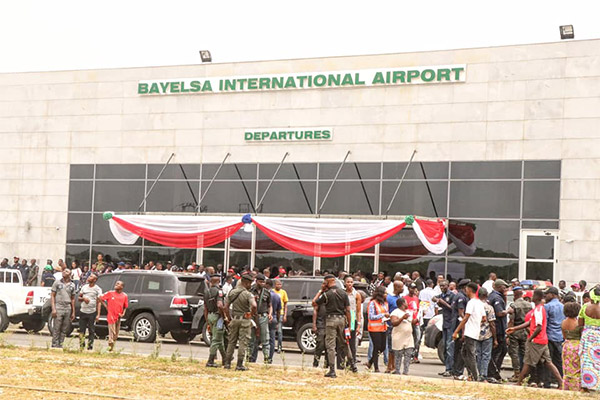 The aircraft took off from the Murtala Mohammed Airport 2 (MMA2) in Lagos at exactly 3 pm and touched down at about 3.45 pm in Bayelsa.

Bayelsans were agogged on Wednesday as first commercial flight operations commenced at the Bayelsa State International Airport with the United Nigeria Airline (UNA) aircraft touching down about 3.45 pm.

A mammoth crowd of jubilant Bayelsans thronged the airport from early in the morning in order to witness the historic event defied rain pour and waited patiently for the plane to touch down. 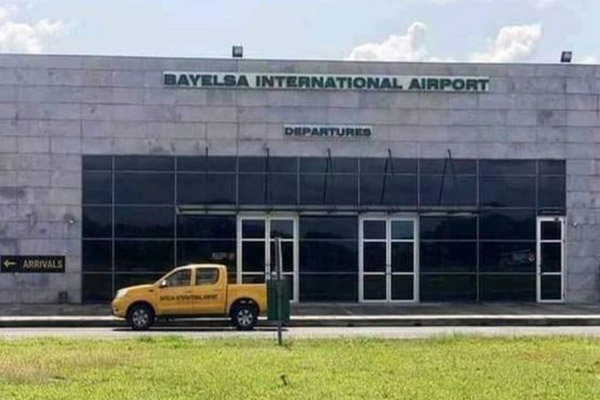 Addressing the crowd on arrival, Senator Diri, said the full commercial flight would commence in two weeks based on bookings made, assuring that commencement of commercial flight signals economic development of the state by bringing Bayelsa to the world and the world to Bayelsa.

His words: “This significant event is the culmination of the aspirations that were birthed by late Chief Diepreye Alamieyeseigha, former governor of the state, which was eventually built by Senator Seriake Dickson, my predecessor. And it is under my administration that this project was crystallised. This is a demonstration that teamwork truly works.

“I am happy to report to you that the pilot of the United Nigeria Airline said our runway is one of the best in Nigeria. It is our determination to make Bayelsa truly the Glory of All Lands and we are making Bayelsa a construction site.”

Senator Diri also expressed gratitude to his deputy, Senator Lawrence Ewhrudjakpo, and his team whom he said worked tirelessly to bring the project to fruition.

Speaking on behalf of the state’s national assembly caucus, Senator Moses Cleopas representing Central Senatorial District, congratulated Governor Diri and Bayelsans for achieving the feat and lauded him for his visionary leadership.

In their separate goodwill messages, Speaker of the House of Assembly, Abraham Ingobere, chairman of the state Traditional Rulers Council and Amanyanabo of Twon-Brass, King Alfred Diete-Spiff as well as Chief Obiora Okonkwo said with the airport in place, it would open a plethora of economic opportunities and place Bayelsa on the world map.

They urged Bayelsans, particularly the youths, to take advantage of the opportunities that the airport facility world bring to empower themselves.