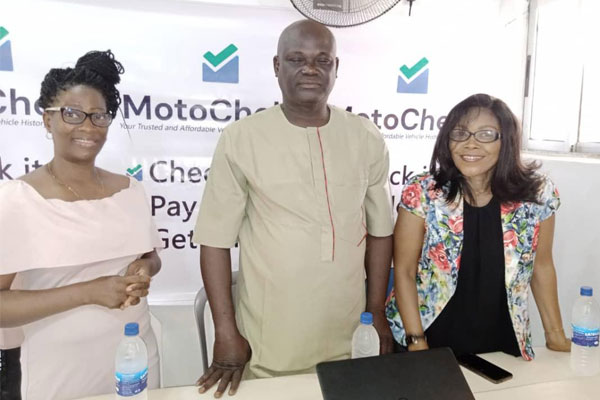 Promoters of the company, Segun Abiodun and Ayo Tifase said, at its inauguration in Lagos recently, that they were also out to help the Federal Government curb the unbridled importation of salvaged or junk vehicles.

They explained they were providing Nigerians with Vehicle History Reports (VHRs) at a reduced cost compared to what is obtainable in the Global VHR market.

Ayo Tifase said: “A large percentage of the Tokunbo vehicles imported into Nigeria are defective as most of them are Accidented and Refurbished”. Consequently, a lot of these vehicles develop copious problems when the buyers start using them. He added that, prospective buyers in Nigeria can save themselves some of these headaches if they avail themselves of Vehicle History Reports provided by MotoChekit. These reports provide pointers to some of these issues. He also added that VHRs have always been available in developed countries where Tokunbo Vehicles are sourced from, but that the reports are expensive when sourced directly, a situation that MotoChekit is here to change.

Asked why payment for VHRs should be made when they are readily available online, Segun Abiodun replied: “Information about vehicles cannot just be gotten by googling it. Free information on the internet comprises just basic information, it is not comprehensive enough to aid decision-making on whether to buy a vehicle or not. “

“There is also what is called type of Use Information. This information tells you if the vehicle was personal, Rental, Taxi, lease, commercial or even used by security agents. MotoChekit reports also indicates the ownership history of the vehicle from the time it rolled of out the showroom as brand new to the most recent owner. It also includes the state(s) or province(s) it had been used, the length of ownership by its user(s), last reported mileage, odometer rollback, flood or lemon tile, etc.

“Such detailed information are not available on Google.”

When asked what the federal government can do to curb the influx of junk vehicles into the country, Ayo Tifase suggested that the Federal Government can curb the excessive importation of salvaged / junk vehicles by improving the transport infrastructure in the country and an unambiguous policy on standard of imported vehicles.

He said: “People import cars for a variety of reasons. Principal of the reasons being the need to move from point A to Point B. Unbridled importation will continue if there are no alternatives to move goods and services to the length and breadth of the country.

“It therefore goes without saying, that government has a critical role to play in improving the transportation infrastructure in the country. This will reduce the need for everybody to own a car as is the case in developed countries.

“Another way to curb this pattern of used vehicle importation is for the government to set a standard for the vehicles that can be imported. The checklist could include Age of Vehicle and the availability of a clean report from the MotoChekit platform.”