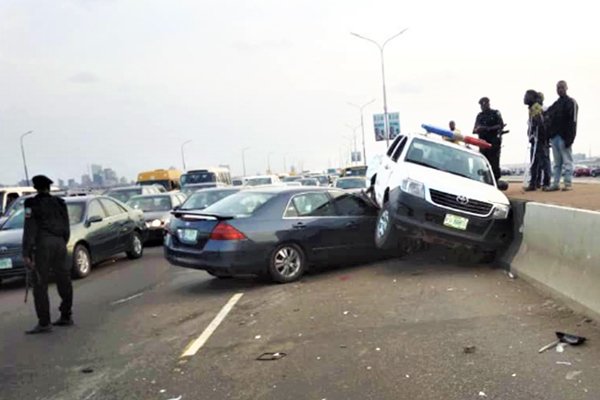 Road Traffic Accidents (RTAs) is a menace that is more deadly than HIV/AIDS, tuberculosis and diarrhoea. Sometimes news about RTAs are received like football and basketball scores by some. 23 people died, 69 commuters fatally wounded.

Many events have shown that the human factor is the major contributor to RTAs and Road Traffic Injuries (RTIs) ranging from over speeding, drinking & driving, seat belts, ignorance of road traffic signs and flagrant disobedience of road safety rules.

It is paramount and pertinent that road users heed to some simple road safety tips in order to reduce road traffic accidents.

1. Put your mobile phones away

The use of smartphones and other handheld devices increase the likelihood of being involved in a crash. In addition to that, texting while driving increases crash risk the more.

Some pedestrians have lost their lives because they were busy with their mobile phones and utterly forgot that RTIs were imminent. Remember when you’re driving, and there is an urgent call to answer, look for a convenient space to park your car and answer the call.

2. Stick to the speed limit

Driving fast and furiously on a road filled with people is an invitation to accident. There are acceptable speed limits for every road and highways. Many motorists lost their lives to over speeding. There is neither reward nor national honour for over speeding, there is also no induction to a hall of fame for overtakers of vehicles.

In the presence of potholes, bumps, rough terrain and unexpected crossing by animals and humans, you may not be able to take control effectively because you’re on high speed.

Sleeping or being drowsy while driving is dangerous. In case you always have an urgent business to attend, hire a driver or beg a friend to drive you to your destination. Driving is a dangerous place to answer the call of nature.

4. Never drive under the influence

Little to excess amount of alcohol can undermine your state of mind, and compromise your ability to drive effectively. In addition to alcohol, driving under anger and depression can equally cause accident because the driver’s mind can be wandering aimlessly, constantly in a state of flux.

Some motorists have lost control of their vehicles because they weren’t focused on the road they were plying.

Front seat passengers alone are not limited to effects of non-usage of the seat belt, passengers in a bus and other long vehicles should use the seat belts in case of high impact.

9 Safety Precautions You Should Keep While Jacking Up Your Car

All You Need To Know About Automobile Event Data Recorder (EDR)