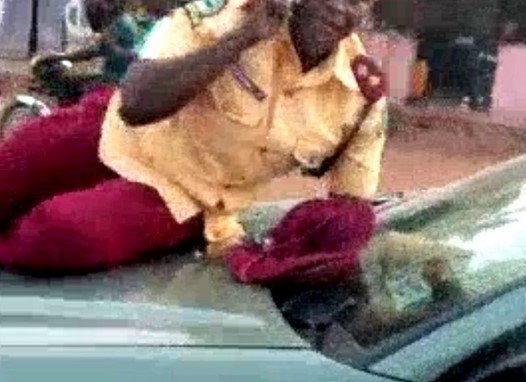 An official of the Lagos State Traffic Management Authority (LASTMA), Seriki Adeyinka has narrated how a taxi driver hit her and drove off on high speed while she hung on the bonnet of his car in Ikorodu area of Lagos State.

Adeyinka, who spoke to The Nation said the incident happened around 6:35 pm on Thursday, noting that she was on the car’s bonnet from Igbogbo garage on Ikorodu road to Oluwanishola filling station on Baiyeku road.

She said she resumed to her duty post at Igbogbo garage at 2pm on Thursday before the incident happened around 6:35pm.

“I was at my duty post with another colleague. Usually, anytime from 4pm, traffic gets busy in the area. We were controlling the traffic when the taxi driver was coming and also picking passengers at the middle of the road, he caused a lot of traffic behind him. We told him to leave the middle of the road but he refused, I was trying to stop him to let him know that what he was doing on the road was bad, but while he sped off, he hit me with the car and I fell on the bonnet of the car”.

“If I had not fallen on the bonnet, the car will have crushed on me. When I fell on the bonnet, instead of him to wait, he moved on with a high speed. I struggled to hold something on the bonnet; he still drove on high speed and was swerving, trying to throw me down but I held something. While the car was moving people were trying to stop him but he was speeding and no one could stop him”.

“Even when a trailer was coming, he tried to swerve me to the trailer maybe I would fall off from the bonnet, but as God would have it, I did not fall because I was holding the bonnet tightly. But thank God an eyewitness who was driving behind was later able to overtake him and he stopped at Oluwanishola filling station on Baiyeku road”.

“It should not be when LASTMA officials are killed that it should be taken up. This taxi driver should pay for what he has done, it is total wickedness and to me he is like a murderer, he should get the consequences of what he has done,” she said.

An eyewitness, Oyeyemi Akieu, a Security Expert, Managing Director/ Chief Executive Officer, Indepth Watcher Security Services, said he was on his way to his Ikorodu home when he saw the incident.

“I was going home that Thursday, when I got to Igbogbo garage, there was traffic and the LASTMA officials were trying to clear it. As I moved forward, I saw that people were putting their hands on their head and saying, ‘do you want to kill her. I tried to look ahead of me to see what was happening, and then I saw three vehicles ahead of me was a lady LASTMA official on the bonnet of moving vehicle and the driver was not waiting for her to come down. She was shouting ‘will you stop, I must not fall, let me come down’, but the driver was just swerving the car as if he wanted to throw her to an oncoming vehicle.

Akieu, who video recorded the incident said; “This made me to bring out my phone and I started recording the session. The distance he carried her was about 500 meters, it lasted for about five minutes.

“I overtook the cars ahead of me, I overtook him and stopped at the front of his car at the filling station, so he had no choice than to stop. Immediately he did, the okada riders and passer-by who saw what was happening ran towards him not long, other LASTMA officials and the mopol came around.”

Akieu said: “For this to have happened day time, it shows the kind of person the driver is, How can a man leave a woman on the bonnet of a moving car, the bonnet will be hot because the car was moving, the man must have killed someone before, to have had the capacity to do such in daylight. He cannot be an ordinary man because an average mind will be afraid of the law, people around and the uniform she was wearing. The woman must be strong for her not to have fallen. He wanted to kill her but she held on to the bonnet.”

He called for proper investigation on the driver. “If his background is well investigated, that man must be a criminal, but thank God the woman did not die,” he said.

Zonal Head, Zone 33, Ogolonto, Ikorodu, Kayode Odunuga, said he received a distressed call from Adeyinka and her colleague, Yusuf, around past 7 that Thursday that they needed attention.

“We urgently called the attention of the commander of mobile unit 63 Igbogbo, where they deployed three armed men to trace our officials down to the scene of the incident. The vehicle was recovered but the driver took to heels. The vehicle was taken to Igbogbo police station and statement was taken.

“We learnt the driver lives in the area; he fled when he sighted the police at the scene,” he said.