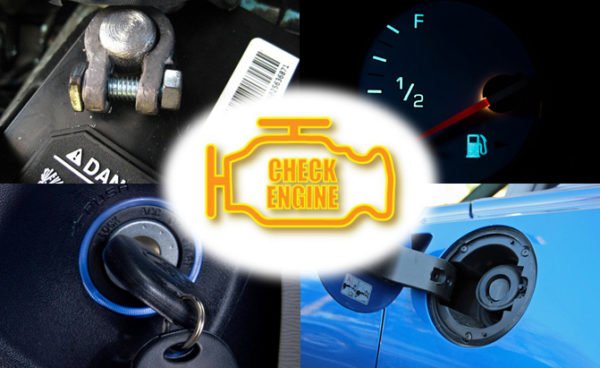 The Engine Will Not Crank or Cranks Slowly

The Engine cranks,But Does Not Run

If you turn over the key and the engine doesn’t crank,that probably means there’s an electrical problem.This can mean a number of things,including faulty sensors.Here are 12 different ways to narrow down the problem in this situation.

If the engine won’t crank and nothing happens:

1)Dead or Weak Battery
Battery might have drained unexpectedly because you may have accidentally left something on such as the headlights or an internal light,after shutting off the engine.Also,the battery may have become too dirty or corroded that electrical connection has become poor or impossible.
The solution for an expired battery is replacement.The solution for parasitic drain is recharging.And the solution for a corroded battery is careful and thorough cleaning.

2)Defective Starter Or Solenoid
Certain noises can tell you a lot about an issue.Sounds such as a click,or a series of clicks could mean the car’s starter is actuating but not engaging with the flywheel.
A bad starter may give the illusion of a weak battery if it draws more current than the battery is able to supply.It will spin slowly and draw excessive power,making a sound similar to a weak battery.

3)Faulty Ignition
When you turn the key in the ignition you create an electrical pathway that gets your car running.If that pathway is not being completed due to an ignition switch issue the car will crank but not fire,that is,if they key will turn at all.

See Related Post: Tips To Buy the Best Car Batteries For Your Car

4)Bad Alternator
The alternator is what generates electricity while you drive and it stores excess electrical power in the battery in order to ensure the car will be able to start the next time you need it to.If you continue to need a jumpstart it may be because your alternator is not restoring your batteries power and it is time for a new one.

Cranks,Doesn’t Run
If the starter cranks the engine normally,but the engine refuses to run,you know that your electrical is good i.e the battery,starter and alternator are probably fine.The cause lies elsewhere.For the car to start running correctly,you need a few ingredients:spark,air, fuel,and compression.

If the engine cranks,but the car won’t start:

5)Fuel Tank is Empty
Even if your gas tank isn’t showing that the tank is empty,this could still be the issue.A miscalibrated fuel gauge can lead you to run out of fuel.

6)Malfunctioning Fuel Pump
A fuel pump is responsible for sucking fuel from the fuel tank,delivering it all the way to the engine injector heads.A broken fuel pump won’t supply enough fluid towards the injectors,causing the engine to crank but not to start.One of the reasons fuel pumps get damaged is poor quality of petrol as well as constantly running your car with a low tank level.

7)Blocked Fuel Filter
The function of fuel filter is to clean out any debris from the fuel that would otherwise reach the head of fuel injectors,damaging them.A clogged or blocked fuel filter prevents fuel from reaching the engine.

8)ECU/PCM Failure
The function of Electronic Control Unit/Power Control Module is to regulates air and fuel intake according to data filled in by sensors all around the vehicle,adjusts the voltage delivered by the alternator and in some cases,provides HUD data for the driver,such as mileage,speed,etc.
A failed ECU will render your vehicle motionless,as neither electric power nor fuel will be delivered to the engine.

9)Spark Plugs
If you have trouble starting your vehicle,it could be a sign your spark plugs are worn.
Bad Spark plugs or ignition coil may need replacing before your engine can turn over. Also sparks need to happen at the right time and with enough voltage to start the car.Poor engine performance such as poor fuel economy,engine misfiring and slow acceleration are symptoms of bad spark plug or ignition timing issue.It is easy to forget about the spark plugs when their replacement schedule is 100,000 miles.

10)Timing belt or Tensioner Failure
It is recommended to change your vehicle’s timing belt approximately each 40,000 to 60,000 miles.Failure to replace the timing belt on time may cause it to break,causing a high level of internal engine damage such as damage to the cylinder head hardware(rocker arms,push rods or valves),damage to crank bearings or oil pump inside the oil pan.

11)Malfunctioning Distributor or Coil Pack
Failing distributors or coil packs are a common issue on car not starting situations. What happens is that the distributor or the coil pack doesn’t deliver electrical charges towards the sparkplugs.When this happens, fuel inside the cylinder heads doesn’t get ignited.

12)Defective Sensors
More recent vehicles come with lots of sensors measuring almost every variable of the vehicle.In some cases,the electronic control unit of the vehicle won’t allow to engine to start as a safety measure.This may be due to the ECU not receiving signal from critically important sensors such as the cam or crank sensors or fuel line sensor.

See Related Post: Tips To Buy the Best Car Batteries For Your Car

5 Factors To Consider Before You Compete With A Trailer On The Road.