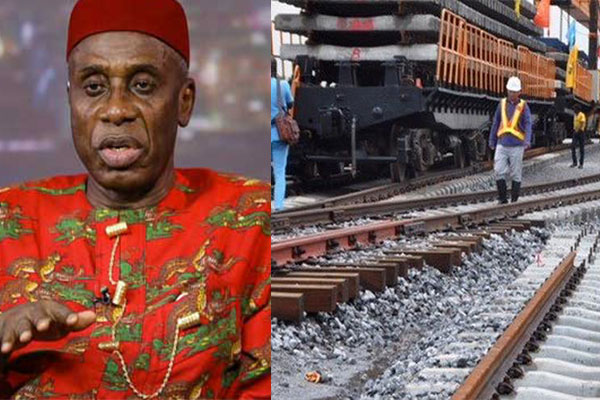 Kano-Maradi rail project will cost $1.9 billion, Nigerian Government to source for it in Europe, Minister of Transportation, Rotimi Amaechi says.

The Minister of Transportation, Rotimi Amaechi has said that the Kano-Maradi (Niger Republic) rail project will cost the Nigerian government $1.9bn.

The minister said this on the Channels Television’s Sunday Politics. “The project is going to cost us $1.9bn and we will source it from mostly Europe,”

While giving this projection, he however noted that the country has not secured the money, stressing that “we are about concluding.”

On how long it will take the country to repay the loan, the 58-year-old explained that it is not within the jurisdiction of his ministry but noted that the railway project will commence on Tuesday.

He explained that the project will enhance foreign investors to turn their attention to the country. He argued that it is for the best interest of Nigeria for the construction of the Kano-Maradi railway.

The Minister also spoke about politics in the country. He dismissed suggestions that some Nigerians are touting him as the next president. Meanwhile, he prophesied that only God knows Nigeria’s next leader.

“I am still the Minister for Transportation and only God can tell who will be the President of Nigeria in 2023,” he added.

Rolls-Royce ‘Spirit of Ecstasy’, The Most Famous Bonnet Ornament, Is 110 Years

Man Dies In Hit And Run Accident In Awka (PHOTOS)