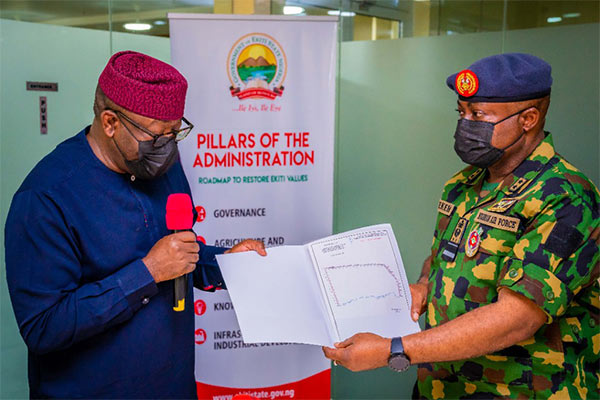 The Nigeria Air Force (NAF) reiterates its commitment in the development of Ekiti Cargo Airport Project.

NAF commends Gov. Fayemi for releasing a portion of land at the international airport for the Force.

It plans to establish a base at the airport to strengthen its efforts in tackling the present security challenges in Nigeria.

The Nigeria Air Force (NAF) has reiterated its commitment to deepen collaboration with Ekiti State Government in the development of the State Cargo airport, as the Chief of Air Staff, Air Marshal Oladayo Amao inspects a portion of land allocated in the airport for the force airbase.

Air Marshal Amao, during a short visit to Governor Kayode Fayemi in his office in Ado Ekiti before the inspection tour, disclosed that the visit was a follow up to the Governor’s initiative which he discussed with the former Chief of Air Staff, Air Marshal Sadique Abubakar at the force headquarters in Abuja last year.

The Chief of Air Staff, who was represented by the Chief of Policy and Plans, NAF headquarters, AVM Remigus Ekeh expressed delight that the initiative has experienced tremendous progress within the last one year that it was conceived.

He stated the commitment of the force in making the country prosperous and commended Governor Fayemi for releasing a portion of land at the international airport for the force to establish a base to strengthen the force’s efforts at tackling the present security challenges in the Country.

“We thank you for fulfilling your promise of giving us a portion of land at the international cargo airport for the air force to set up a base. We are very grateful and we will continue to ask for your corporation especially at this time when the nation is facing great security challenges.

“We are also mindful of your efforts in trying to make sure that the good people of Ekiti State enjoy good governance. He said.

Meanwhile, Governor Fayemi, at the meeting, presented the aerial survey document of the allotted portion to the Chief of Air Staff and noted that the presence of an air force base at the cargo airport would strengthen security architectures and efforts in restoring sanity and security to the country.

He explained that the Ex-Chief of Army Staff, Air Marshal Abubakar had promised that the space would be used as part of the central command of operation in the country, considering the strategic proximity and location of Ekiti to States in the central area involving Kogi, Kwara, Niger, and the FCT and as well as its straddling with other states in the West.

The Governor while pleading for accelerated development in the actualization of the initiative, assured the readiness of the state government to present the Certificate of Occupancy to NAF and work with them in implementing their plans for the space, adding that the main contractor handling the project had promised to deliver by August next year.

“I am delighted that you are still very much committed to this initiative on our part we have done the survey of the aerial that we have identified on the basis of earlier discussion with the air force and I will present to you that portion that is meant for the NAF within the airport operations and what we will plead for is accelerated development.

“This is not just within our purview but within your purview as well but our vision and going by the timetable that we have from the main contractor the airport should be ready by August 2022.

“So once you take your own portion of the airport and you visit and do all that is necessary we will be happy to quickly make available the certificate of Occupancy to the NAF and then work with you to attain the plans that you have for the site that has been located to the NAF,” Fayemi said.

Here Are 30 Countries, Cities And Automakers That Have Agreed To Ban ICE Vehicles By 2040