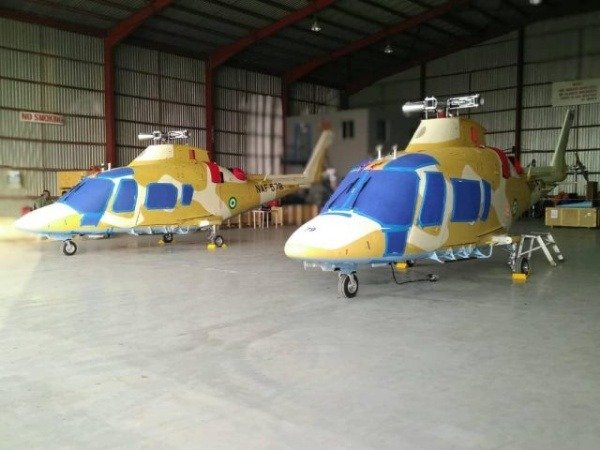 The Nigerian Air force NAF has taken delivery of 2 new AugustaWestland Attack helicopters to tackle insecurity across the country.

The Nigerian Air Force NAF has taken delivery of two AugustaWestland Attack helicopters to strengthen its arsenal for the fight against insurgency in the North-West.

The acquisition of the military helicopters was part of renewed efforts of FG to tackle current and emerging security threats in the country.

“The Nigerian Air Force (NAF) is set to induct the second batch of 2 new Agusta Westland 109 Power Attack Helicopters procured by the Federal Government as part of the fleet enhancement efforts to enable more effective and efficient employment of airpower to tackle the security challenges facing the Nation.

“They were received by a NAF Team, led by Air Commodore Halim Adebowale, as well as the Country Representative of Leonardo Helicopters, manufacturers of the aircraft.

“NAF engineers and technicians, in collaboration with a Team from Leonardo, have commenced assembly of the helicopters preparatory to their induction into service.

“It would be recalled that the NAF had earlier received the first batch of 2 new Agusta 109 Power Helicopters that were inducted into the Service on 29 April 2019 during the 55th NAF Day Celebration in Abuja.

“Beside these, 15 additional aircraft have been ordered by the Federal Government, which include 12 Super Tucano attack aircraft and 3 JF-17 Thunder multi-role fighter aircraft. In addition, the Service also took over 11 aircraft from other MDAs.

“These include 3 EC-135 helicopters and 3 Dauphin helicopters from NNPC, 3 Donier 228 aircraft and 2 Agusta 101 from the Presidential Air Fleet (PAF); making an unprecedented total of 47 aircraft that have either been inducted into the NAF or ordered for the Service since 2015.

“In the same vein, over 20 previously grounded aircraft have been reactivated within the past 5 years.

“After induction, the 2 new helicopters will be deployed to theatres of operation across the country to reinforce NAF capability in the fight against insurgency and other forms of criminality.”

The induction of the two helicopters will bring to four, the number of the Augusta 109 attack helicopters in NAF’s Arsenal.

The AW109 power attack is armed with .50 calibre machine guns and unguided rockets for close air support and surveillance operations.

It is powered by two Pratt & Whitney Canada PW206C engines, and has a maximum take-off weight of 3,000kg.

Related Topics:AugustaWestland-109-Power-Helicopterboko-haramNAFNigerian Air Force
Up Next