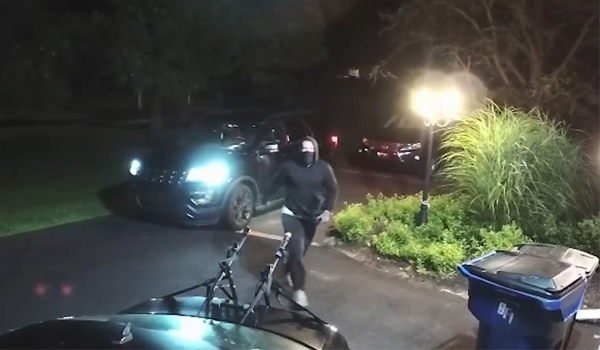 A Pennsylvania man who might have burglarized more than 1,000 cars was arrested Friday, authorities said.

The suspect, now in custody, is “believed to be behind about a thousand unlawful entries into vehicles throughout Bucks County and parts of New Jersey.”

Keith Johnson, 33, was charged with 76 counts of loitering. He was also charged with counts of theft burglary and receiving stolen property, according to NBC Philadelphia.

Johnson, from Bucks County outside Philadelphia, remained in jail on Friday night, NBC Philadelphia reported. A online search on Sunday did not show him still in jail.

Bucks County police put out a warning in September about a serial car burglar. It also released security footage reportedly of Johnson engaged in criminal activity.

The suspect was “believed to be behind about a thousand unlawful entries into vehicles throughout Bucks County and parts of New Jersey,” police said last year, targeting unlocked cars while wearing all black clothes and white and orange sneaks.

Police noted his “distinct style of walking and running,” where he walked on his toes.

“As a result of the tireless investigation by our office in partnership with local law enforcement, this community can have peace of mind knowing the individual charged today with breaking into more than 1,000 cars in Bucks County is being held to account,” Pennsylvania Attorney General Josh Shapiro said in a statement.

It is unclear if Johnson has representation.